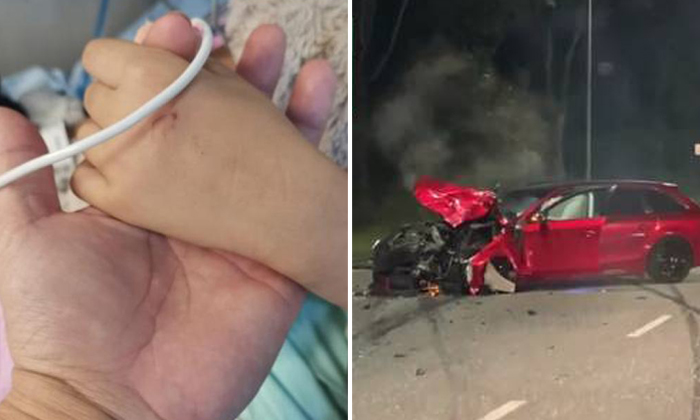 An eight-year-old girl who was flung out of a van in a road accident in Woodlands last month woke up yesterday after 11 days in a coma.

"She cannot speak or respond yet. She just woke up and can only move the left side of her body," he said in Mandarin.

Earlier in the day at about 7.30am, Mr Tan had posted an update on social media on his daughter's condition.

He said the swelling in her brain had gone down and the blood clots were gradually dissolving.

But the mobility on the right side of her body would be affected, and she is estimated to need a longer time to recover.

"She will be required to stay in ICU (intensive care unit) for further observation," he wrote.

Lovelynn is warded at KK Women's and Children's Hospital, where Mr Tan and his wife have been keeping vigil.

She was one of four people injured in the accident involving a van driven by her uncle and a red Audi car on Woodlands Avenue 12 just after 8pm on Oct 23.

She had a head injury, broke both legs and needed emergency surgery.

Also in the van were her sister Lovelle, six, and two cousins - a woman, 23, and a man, 27, who needed surgery for a ruptured spleen.

A 32-year-old male passenger in the Audi was also taken to hospital.

Lovelle was unhurt and has been staying with her aunt. Mr Tan's brother-in-law, 56, was arrested for dangerous driving causing hurt. Police investigations are ongoing.

Related Stories
Girl, 8, flung out of van after accident with Audi is still in coma with head injury and legs broken
Driver, passenger and 1-year-old baby taken to hospital after van flips over in accident with taxi at Cross Street
9-year-old girl taken to hospital after accident involving 3 cars and trailer on PIE
More About:
accident
injured
child
arrest
dangerous
reckless driving
van
audi