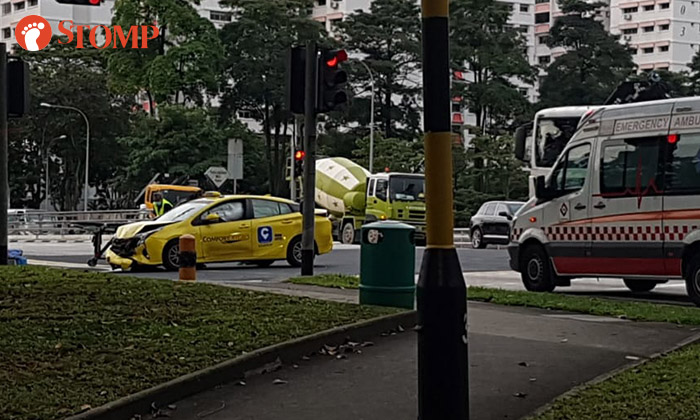 An eight-year-old boy, who's a passenger in a car, and a 56-year-old cabby were taken to hospital after an accident occurred at the junction of Choa Chu Kang Way on Thursday evening (Dec 19).

A Stomper was walking home with his son and his wife at about 6.30pm when they saw the aftermath of the accident.

He contributed photos and a video of what he saw.

The Stomper said: "The accident had already happened when we were there.

"My wife was the one who took the photos and the video."

The Stomper added: "While we were crossing the road, we could see that the taxi driver was still in his car.

"The front and the side of the taxi was very badly damaged.

"The other car was very far behind.

"We saw a man standing near the car. I think that's the driver.

"I'm also a driver and I've seen many accidents.

"Felt sad when I saw the aftermath of this accident and was wondering how did it happen."

Responding to a Stomp query, the police said: "at 6.25pm on Thursday (Dec 19), the police were alerted to an accident involving a car and a taxi at the junction of Choa Chu Kang Way and slip road into Kranji Expressway.

"The taxi driver, a 56-year-old man, was conscious when conveyed to Khoo Teck Puat Hospital.

"A passenger of the car, an eight-year-old boy, was conscious when conveyed to National University Hospital.