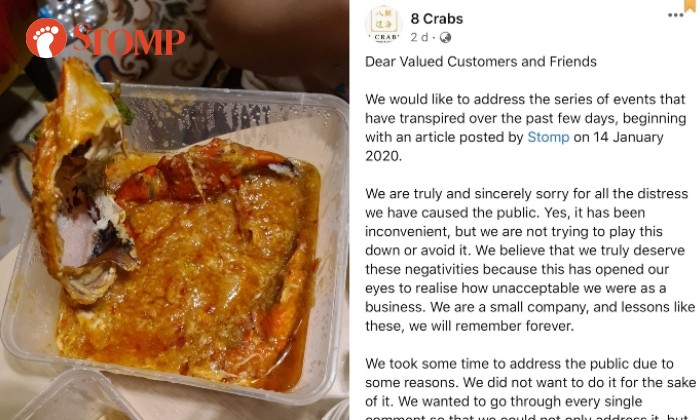 8 Crabs issued a public statement on Saturday (Jan 16) to apologise after customers claimed that the company was actively deleting negative reviews on their Facebook page.

These incidents came to light after a Stomp report, which highlighted the frustrating experiences by three customers, was published on Thursday (Jan 14).

The customers told Stomp that the crabs that they had ordered for their New Year's Day meals were less than satisfactory due to 'mushy' meat that they believed was not fresh. 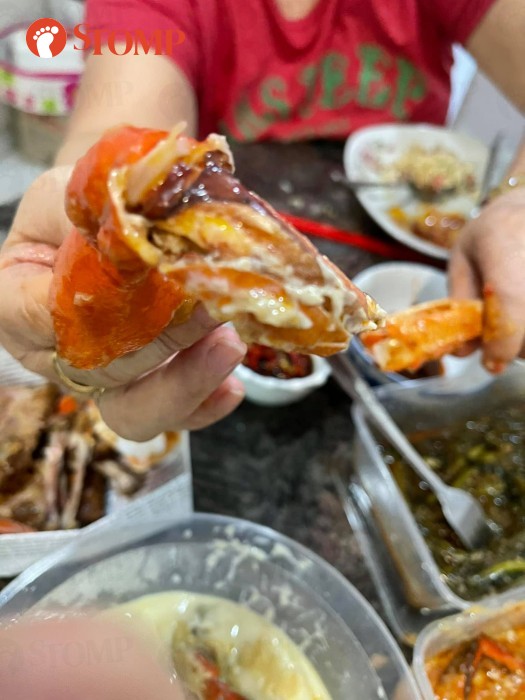 When they subsequently shared their feedback on 8 Crabs' Facebook page, they realised that their reviews were promptly deleted and that they were blocked.

This led them to share their frustrations with Stomp and the saga quickly caught the attention of the public over the past few days.

In response to a Stomp query, a spokesman for 8 Crabs said: "This episode has certainly aided us in reviewing certain issues. Although this situation may be seemingly tormentful, I think it is necessary that these things happen so that businesses serve the people much better.

Dear Valued Customers and Friends We would like to address the series of events that have transpired over the past few...

In the Facebook post, 8 Crabs wrote: "We are truly and sincerely sorry for all the distress we have caused the public. Yes, it has been inconvenient, but we are not trying to play this down or avoid it.

"We believe that we truly deserve these negativities because this has opened our eyes to realise how unacceptable we were as a business. We are a small company, and lessons like these, we will remember forever."

8 Crabs added that they took some time to address the public as they wanted to go through all the comments to properly address the situation.

"The truth of the matter is that we did delete comments because we wanted to look good, and we were being too simple minded about it. There is no excuse for this," 8 Crabs wrote.

In the post, they also mentioned that they will be rolling out a permanent "one for one guarantee".

8 Crabs explained that this would allow customers to receive an immediate replacement should they receive a sub-par order.

Their statement was met with mixed responses, with some regular customers showing them support and others who were not as enthusiastic.

Stomper Sean, who chanced upon the Stomp report and wanted to share his experience too, said that he also ordered from 8 Crabs on New Year's Day.

However, he was displeased that he spent $208 on the meal only to receive crabs that he thought was "way too small". 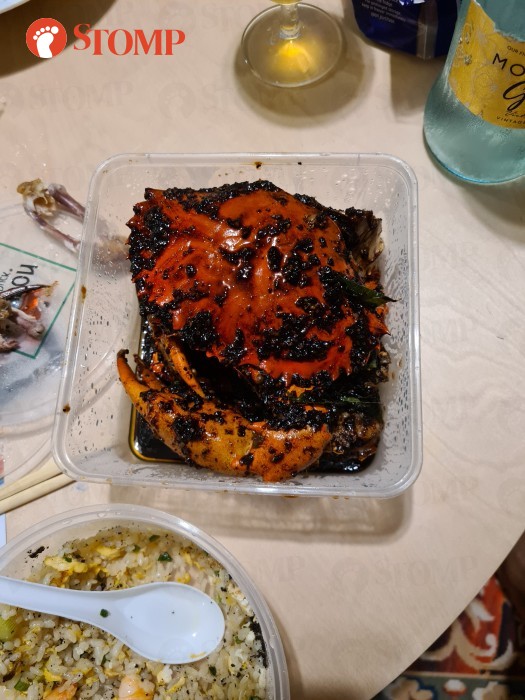 "And yes, I also had my comments deleted and I was blocked on Facebook. I subsequently emailed them but they never responded. They claimed to have award-winning crabs but it's all crap."

When asked how he felt about 8 Crabs' public statement, Sean said: "I saw the statement. I guess I'm really not the only customer facing this issue.

"I'm not sure if they are sincere because they ignored my messages and emails.

"I emailed them so many days ago but I only received a reply from them today. And all they did was ask me for more information. I'm definitely not going to patronise their services again."