8 arrested in CNB raid: 1 man injured after falling while scaling out of window to escape 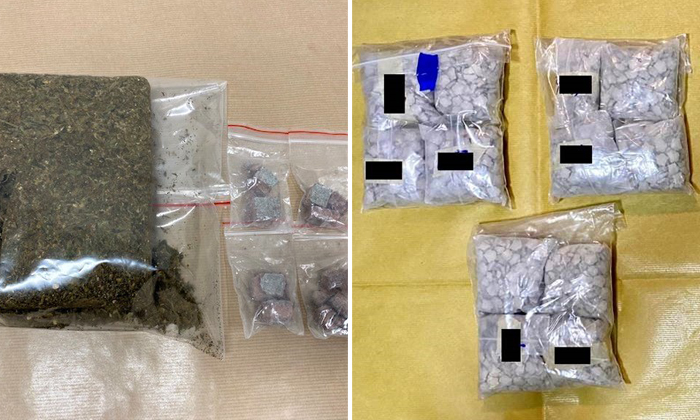 Seven men and and one woman, aged 20 to 71, were nabbed by the Central Narcotics Bureau (CNB) for suspected drug activities on Tuesday (March 2).

The group comprised of seven Singaporeans and one Malaysian.

The drugs seized are estimated to be worth over $326,000, said CNB in a news release.

CNB officers arrested two Singaporean men, aged 65 and 71, at a bus stop in the vicinity of Jalan Bukit Merah on Tuesday evening for suspected drug-trafficking offences.

A search was conducted on both suspects, and a bundle containing about 536g of cannabis was found on the older male.

That same evening, a separate party of CNB officers raided a residential unit in the same vicinity and arrested three Singaporean men, aged 62 to 68, therein.

A search was conducted, and a bundle containing about 320g of cannabis and six Erimin-5 tablets were seized from the unit.

"One of the occupants of the unit, a 32-year-old Malaysian man, attempted to evade arrest by scaling out of the window of the unit located on the second storey," CNB added.

"In the process, he fell and suffered injuries."

The man was conscious when taken to Singapore General Hospital for medical attention and is currently in stable condition.

CNB said: "A search was conducted on both suspects, and four packets containing about 431g of 'Ice' were found on the man.

"Both suspects were escorted to their hideout in the same vicinity, where eight packets containing about 231g of 'Ice', 1g of cocaine and various drug paraphernalia were further recovered from the residential unit."

The pair were subsequently escorted to a carpark in the vicinity of Woodlands Crescent, where about 1,010g of 'Ice' and about 1,000 'Ecstasy' tablets were further recovered by CNB officers.

The suspects were also escorted to another hideout in the vicinity of Lorong Limau, where about 349g of 'Ice', more than 3,000 'Ecstasy' tablets, and 100 Erimin-5 tablets were further recovered.

Related Stories
3 nabbed, drugs worth over $400k seized: Man tried to escape by scaling out of 17th-floor window
CNB officers seize over $220k worth of drugs, 2 Singaporeans arrested
16-year-old girl, couple with young kids and man with weapons among 89 nabbed in CNB raid
More About:
CNB
drugs
arrest
raid