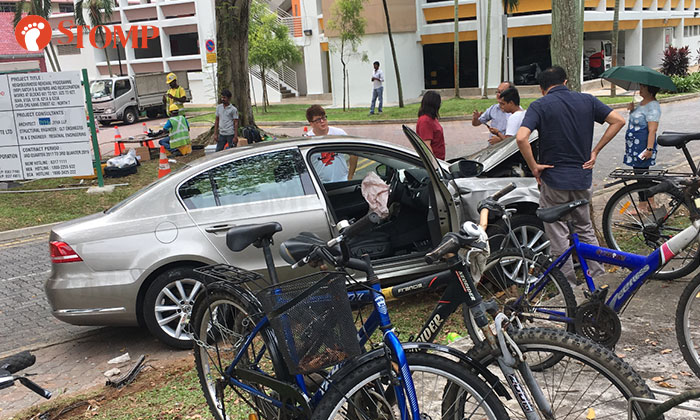 Two people were taken to hospital after their car crashed into a tree at the carpark of Block 621, Choa Chu Kang Street 62 last Friday afternoon (Aug 3).

Stomp understands that the two people are a 79-year-old driver and his 49-year-old daughter.

The man had lost control of his car, resulting in the collision.

Stomper May was on her way to Yew Tee MRT Station when she noticed a crowd near the carpark gantry. She went over to investigate and realised that a car had crashed into a tree.

Photos taken by May show that the airbags in the car had been deployed. The door to the driver seat of the car was also left open.

According to May, an ambulance subsequently arrived.

In response to a Stomp query, a police spokesman said: "On Aug 3 at 12.41pm, the police were alerted to an accident involving a car along Choa Chu Kang Street 62.

"The driver, a 79-year-old man, and his passenger, a 49-year-old woman, were conscious when conveyed to Ng Teng Fong General Hospital.

May added: "Hope the driver and passenger are okay."