73-year-old woman hit in the face by 2.5kg packet of rice that fell from supermarket shelf 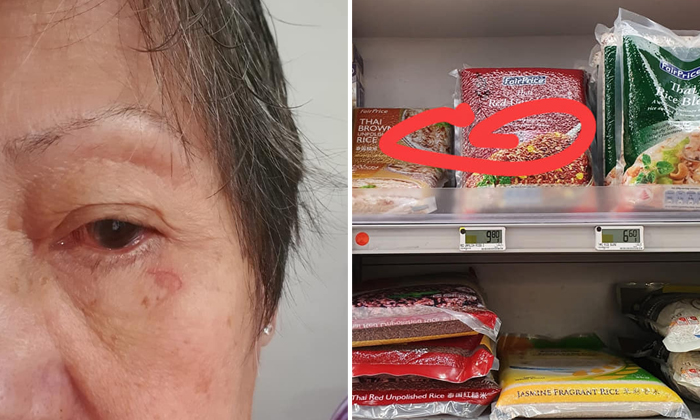 Supermarket chain FairPrice has responded to feedback from an elderly customer who was hurt by a packet of rice that she had been reaching for from a shelf at one of its outlets.

The incident occurred at FairPrice Finest at Changi City Point on September 21, at around 6.55pm.

A reader alerted Stomp to a Facebook post written by Ms Shirley Chua on Tuesday (Oct 13), in which she recounted what happened and shared a picture of her injury.

When contacted by Stomp, Ms Chua said: "I just wanted to get a packet of rice but it was so high on the shelf. When I took one packet of rice down, three packets fell down together.

"I could not run fast enough and one packet hit my face, and all three fell to the floor.

"My face was in pain. I quickly rubbed my face in case of a bruise or swelling the next day. I just kept using my hand to keep rubbing and rubbing, because I had my mask on."

Ms Chua said she then picked up the rice and went to pay for her purchase. However, as she had bought food and was in a rush, she did not inform any staff about the incident.

She added: "I was still rubbing my face as I was afraid it would become blue-black. When I went home, I used my handphone camera to look at my face and saw blood and a 2cm mark."

The following day (Sep 22), Ms Chua returned to the supermarket to share what happened. 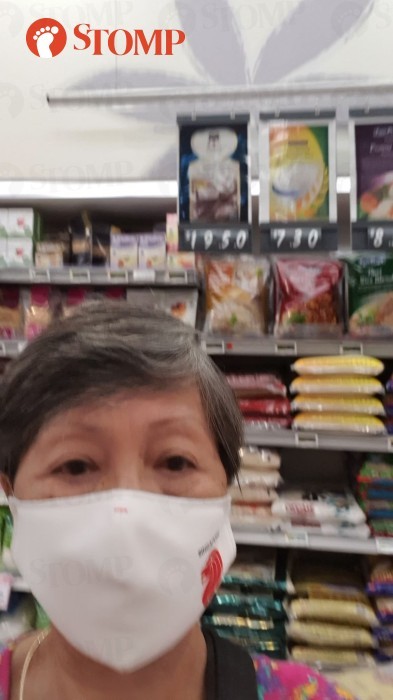 "I told them not to put the rice like that in case it fell on other people, but did not see any changes even after several visits following the incident," said Ms Chua.

In response to a Stomp query, a FairPrice spokesman said the company has contacted the customer regarding the incident to express concern on her well-being.

"We have also explained to her that the small quantity rice packets are placed in the manner she described to allow easier access for customers," added the spokesman.

"Stacking the rice packets - one on top of another - would make it difficult to reach since this is on a higher shelf.

"We have also advised her to approach our staff should she need help to obtain any products that may be beyond her reach.

"Nonetheless, we have noted her feedback and we will review how the product is placed.

"Customer safety remains a priority at our stores and we urge customers to approach our staff if they require any assistance."

In a subsequent update, Ms Chua said that FairPrice gave her some fruits when she visited the supermarket again.

I went to NTUC Finest to buy things after pay finish walk out. Supervisor call Aunty aunty come, she say so sorry about rice fall on me. And she give me some fruits ah.