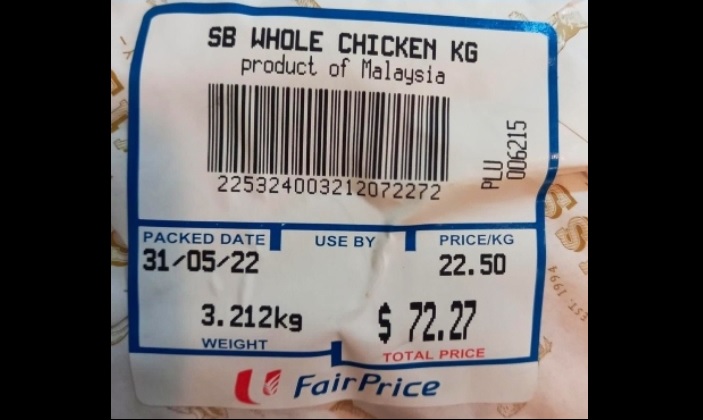 A bag of chicken from Malaysia being sold at $72.27 by NTUC FairPrice has raised the eyebrows of some shoppers and netizens here, prompting a clarification from the supermarket chain that has led to further disbelief.

A day before Malaysia's chicken ban kicked in on Wednesday (June 1), a photo of the bag of "SB Whole Chicken" with the FairPrice label began circulating online.

"Is this a turkey?" asked a netizen on a thread on online forum Hardwarezone. Others speculated that it was a hoax, believing the photo was doctored to fan controversy amid the chicken shortage, or a weighing scale error, for which the supermarket had in February come under fire.

But on Thursday evening, FairPrice put up a Facebook post clarifying that the packet was, in fact, correctly labelled.

It contained, however, "chickens" in the plural - with two whole birds from premium butcher Swiss Butchery. Swiss Butchery operates a counter within one of FairPrice's supermarkets.

"The image of the product label is of an organic kampung chicken sold at one of our concessionaire counters operated by Swiss Butchery. This product is priced at $22.50/kg (per the label's packed date on 31 May 2022), and the product label also showed the product weight of over 3kg as 2 whole birds were packed together, weighed and priced under the same label," FairPrice said in the post.

"We hope this helps to dispel any possible misunderstanding this image may have caused."

But hours after the post went online, rather than settling the issue, it had raised more questions.

By 10.20pm, four hours after it went up, it had gathered more than 1,300 likes and had been shared 492 times, a much higher engagement than usual FairPrice posts.

Unhappy netizens wanted to know why the chicken was being retailed at such a high price.

"There's no misunderstanding here. We're just appalled by the price of $22.50/kg for organic kampung chicken sold at NTUC Fairprice," Facebook user Angela Lau wrote in a comment on the post.

But there were others, like netizen Averil Chan, who were more sympathetic. She wrote: "Why do you (NTUC Fairprice) owe the public an explanation? Those who wanna buy will just buy loh. Those who don't can ignore loh."

Moreover, kampung chickens are allowed to run free, without being confined to cages.

The Straits Times has asked FairPrice what the price of the same chicken was before the Malaysian export ban, which kicked in on Thursday and has led to an increase in chicken prices here.