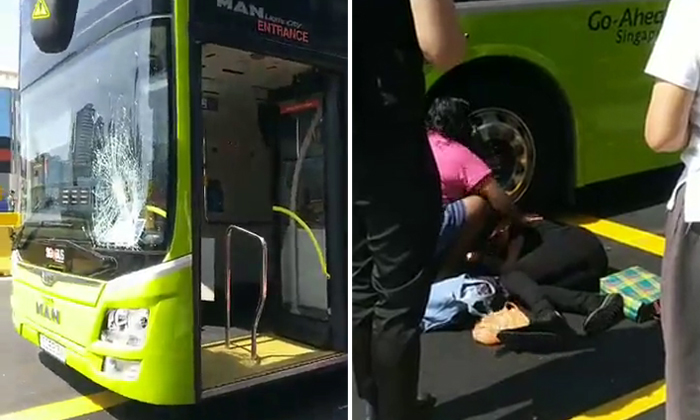 A 49-year-old man was arrested after the bus that he was driving hit a 72-year-old pedestrian along Marine Parade Road on Friday morning (Aug 2).

In response to queries by Stomp, the police said they were alerted to the accident, which occurred in the direction of Bedok South Avenue 2, at 11am.

The elderly woman was unconscious when taken to Tan Tock Seng Hospital, which had been alerted to be on standby to receive her.

The bus driver was subsequently arrested for causing grievous hurt by negligent driving and police investigations are ongoing.

A video taken at the scene by Facebook user Anele Onazrul shows a Go-Ahead bus, of service route 43, with a cracked windscreen.

The pedestrian can be seen lying on the road and surrounded by several members of the public, some of whom were tending to her.

The crowd also helped by sheltering the pedestrian with an umbrella.

Meanwhile, the driver, who can be spotted on the bus, said: "The light was green, but she still wanted to cross the road."

According to Shin Min Daily News, the woman was crossing the road when her head hit the windshield of the bus.

Go-Ahead Singapore told Stomp in a statement that it "remains in ongoing dialogue with her family to offer full assistance."

A spokesman added: "We are sorry to see that this incident took place and in line with established procedure, we continue to liaise with all relevant authorities in their investigations."