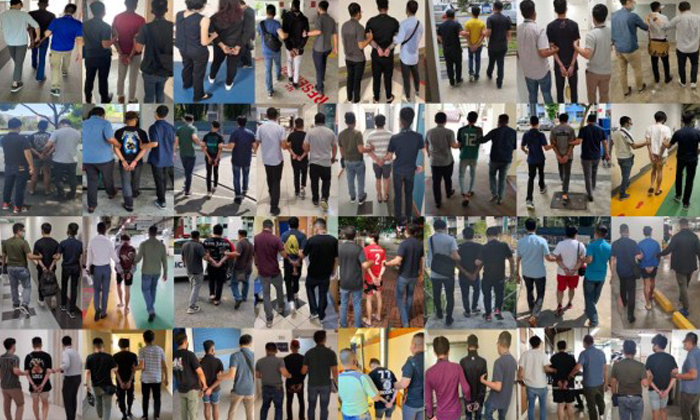 A total of 71 individuals, aged between 16 and 62, were nabbed for their suspected involvement in perpetrating job scams during a four-day enforcement operation.

During the anti-scam operation conducted from September 20 to September 23, officers from the Commercial Affairs Department and seven SPF Land Divisions mounted simultaneous island-wide raids that left to the arrest of 59 men and 12 women.

Some are also believed to have rented out their bank accounts to scammers or assisted them by carrying out bank transfers and withdrawals.

Separately, 22 men and seven women will be charged in court on Friday (Sep 24) for various offences connected to money mule activities.

These offences include cheating, money laundering, facilitating unauthorised access to computer material and carrying on an unlicensed business of providing payment service.

The police added: "These 29 individuals are alleged to have provided criminal syndicates with the use of their own bank accounts, and even other persons’ bank accounts in some cases.

"For some of them, they are believed to have cheated the banks into opening bank accounts so that they can hand over the bank ATM cards and iBanking PINs to the criminal syndicates."

Scammers would then request for victims to order items from online platforms in order to improve sales on these platforms, progressing from low-cost items to more expensive items.

Victims are made to pay for the items by fund transfers to various bank accounts. Victims would initially receive their payment back in full on top of a good commission.

When the scheme progresses to the point where victims have spent large sums on their orders, their job contact becomes unreachable and the victims would not receive any reimbursement for their expensive purchases.

The police cautioned job seekers to be wary of job advertisements that promise the convenience of working from home and being paid a high salary for relatively simple job responsibilities.

"Legitimate businesses will not require job seekers to utilise their own bank accounts to receive money on the businesses’ behalf," they added.

"These acts are common ruses used by scammers to lure individuals into carrying out illicit payment transfers on their behalf.

"To avoid becoming involved in money laundering activities, members of the public should always reject requests to use their personal bank accounts to receive and transfer money for others."

For more information on scams, members of the public can visit www.scamalert.sg or call the anti-scam hotline at 1800-722-6688.

Anyone with information on such scams may call the police hotline at 1800-255-0000 or submit information online at www.police.gov.sg/iwitness. All information will be kept strictly confidential.