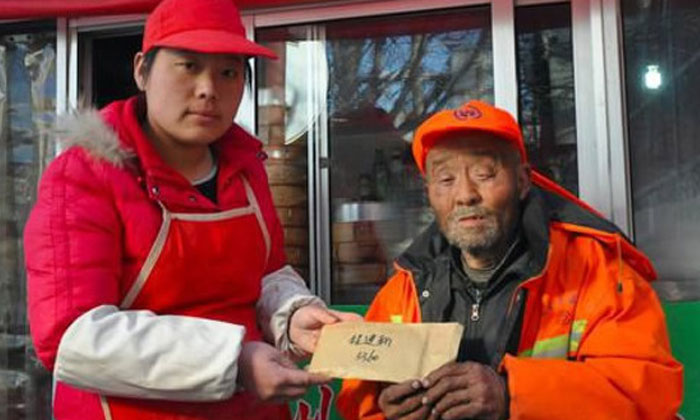 A 70-year-old cleaner, Cheng Yanxin, from Binzhou City, Shandong province, was walking home last Thursday (Jan 12) with an envelope containing his three months worth of salary.

Upon reaching home, he then realised that his hard-earned 3,360 yuan was missing.

He had searched high and low for it, but to no avail.

Cheng told his friend Zhao Ping -- a worker at a local restaurant that he frequented -- about what happened, and she was willing to find a way to help him.

Zhao took to WeChat immediately to post about the situation, including the exact amount that Cheng had lost.

His post got the attention of many locals who were part of WeChat circles, and soon enough, Zhao found herself bombarded with dozens of calls from strangers who wanted to help Cheng.

A little later that day, a man surnamed Liu walked up to Cheng and handed him 'his envelope' that he claimed to have found lying on the ground.

But Cheng was not that easily fooled.

He noticed that the writing on the front of the envelope was done with a marker instead of the original ballpoint pen.

Liu eventually admitted to that the 'envelope of cash' was not the original one belonging to Cheng.

Liu and his friends wanted to help really badly, so they each chipped in money -- adding an additional 600 yuan so that Cheng could have a little extra to treat himself since the Spring Festival break was coming.

Though Cheng was not able to find his original paycheck, Cheng accepted the generous donation, and told Shanghaiist that he was incredibly moved by the kindness of the strangers.

Related Stories
Good Samaritans who stopped to help me after accident at Lornie Road: If you see this, thank you!
Cyclist gets injured when his bicycle chain snaps -- and these workers come to the rescue
Cabby goes out of his way to return passenger his hearing aid -- and is touched to receive these in return
good samaritan
good deed
inspiring
elderly man
China
kind