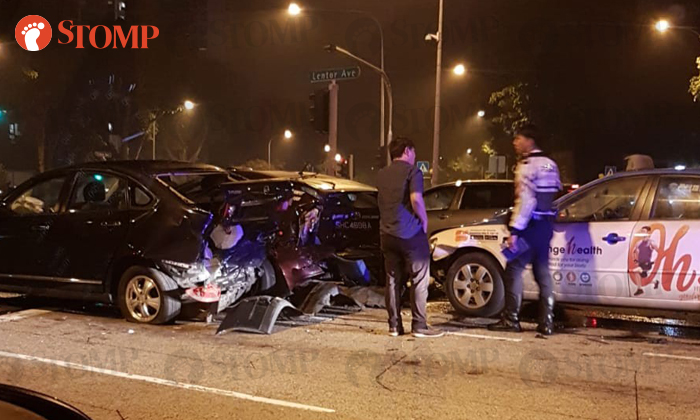 Seven people were taken to hospital after an accident involving two taxis and a car in Yishun after midnight on Monday (Oct 15).

Stomper Edwin alerted Stomp to a circulated photo of the collision, showing the three damaged vehicles. The car can be seen with a mangled rear bumper.

In response to a Stomp query, the police said they were alerted to the accident at the junction of Lentor Avenue and Yishun Avenue 1 at 12.31am.

"Seven people were conscious when conveyed to Khoo Teck Puat Hospital," they added.

Stomp understands that the seven people were aged between 10 and 70 years old.

They were drivers and passengers from all three vehicles, and had no visible injuries.

Stomp understands that the first taxi was stationary at a red light at the traffic junction.

The car had also stopped for the same traffic light when its driver felt an impact from the back, before he surged left and hit the first taxi.

Stomp understands that the third vehicle, another taxi, had been travelling along the same road when he approached the junction and allegedly fell asleep at the wheel, thus sparking the chain collision.

Ms Tammy Tan, Group Corporate Communications Officer of ComfortDelGro Corporation Limited, told Stomp: "Our priority is the welfare of all injured parties and we are reaching out to them and will assist them the best we can.

"We will also render our assistance to the police in their investigation."