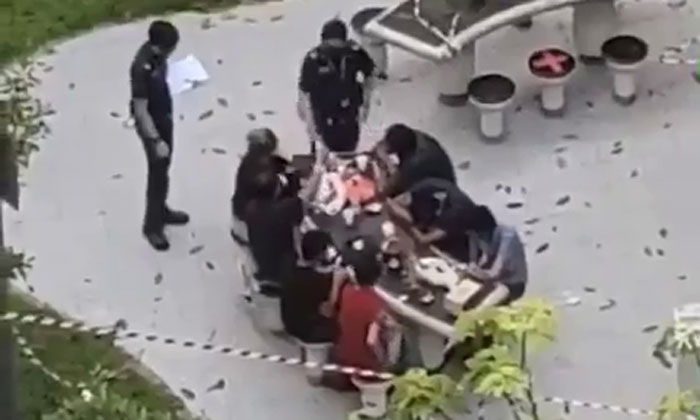 Six men and one woman, aged between 23 and 25, were fined for breaching safe distancing measures after gathering together at a park at Woodlands Circle on Saturday (May 2).

Stomp was alerted to a video circulating online of the incident showing the group of seven sitting on a bench near a barbecue pit that had been cordoned off as part of safe distancing measures.

In response to a Stomp query, the police said at about 6.56 am, they received multiple calls for assistance from members of the public that seven people were sitting on a bench that had been cordoned off at Block 736 Woodlands Circle.

"When the police officers arrived, they found six men and one woman, aged between 23 and 25, sitting on the bench within the cordoned area," a police spokesman said.

"They were each issued with a notice of composition for breaching safe distancing measures under the COVID-19 (Temporary Measures) (Control Order) Regulations 2020.

"They were advised to adhere to the measures, and left the area thereafter."

A notice of composition means they were fined either $300 or $1,000, depending on how many times that have breached safe distancing measures.

According to Shin Min Daily News, the group had been drinking and eating for hours before the police arrived.

A resident said his family was woken up at 4am from the laughter and chatter coming from the group.

He called the police when the group had still not dispersed by 7am.

He noted this was not the first time the group has loitered at the park.

He added that they left trash behind at the table after leaving the park, creating more work for cleaners.