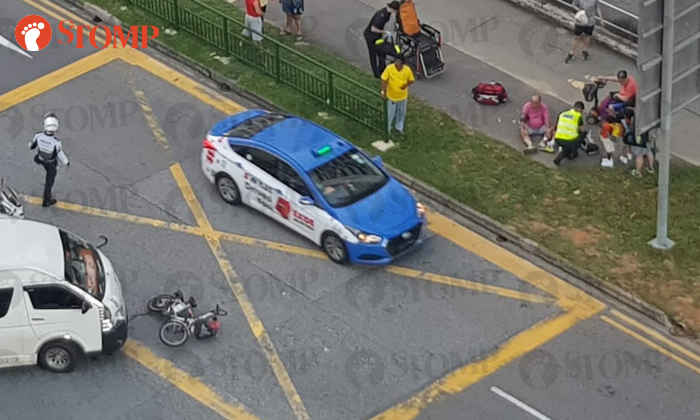 A 68-year-old man and a six-year-old girl were taken to hospital after an accident involving their power-assisted bicycle (PAB) and a private bus in Yishun on Friday evening (June 14).

Responding to a Stomp query, the police said they were alerted to the accident along Yishun Ring Road at 6.10pm.

The elderly PAB rider and the girl, his pillion, were both conscious when taken to Khoo Teck Puat Hospital and KK Women's and Children's Hospital respectively.

Stomper Bugatti, a resident in the area, contributed photos showing the PAB lying on the road, in front of the private bus.

The elderly man can be seen sitting on the pavement nearby while paramedics attended to him.

Bugatti told Stomp: "I heard a loud bang and awhile later, there were ambulance sirens."

According to the Stomper, the accident resulted in a traffic jam.

Bugatti, who previously alerted Stomp to an accident where a female pedestrian was hit by a car along the same stretch of road, added: "This area outside Khatib Court is an accident-prone site.

"We residents who use the road sometimes face difficulties in exiting the carpark. Jaywalkers from all sides dash across the road to catch their buses.

"The traffic junction at the main road nearby has a green left-turn arrow. When the traffic light is red, it creates congestion and makes it hard for us residents to exit the carpark safely.

"I think there might be a design flaw and something should be done about it."

Related Stories
Female pedestrian injured after getting hit by car along Yishun Ring Road
Pregnant woman cries while being led into ambulance after 2-car accident in Yishun
25-year-old motorcyclist taken to hospital after accident with 2 cars at Yishun junction
More About:
accident
pmd
Yishun
cyclist