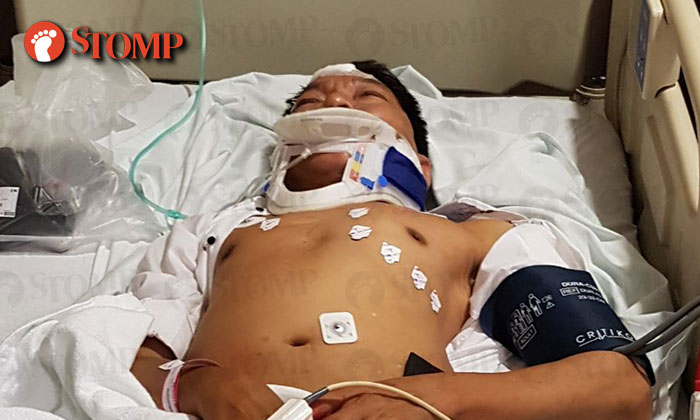 Stomper Jeslyn’s father, a 67-year-old GrabCar driver’s was assaulted by a man who accused his vehicle of blocking his way.

The incident happened along Simon Road in Hougang on Wednesday (Jun 14) at around 4.40pm, and the entire process was captured by a CCTV.

Jeslyn’s father told reporters that his assailant had punched him and even battered his head with a can of air freshener.

He said that he was on the way to meeting some friends in the vicinity during the time of the incident, waiting at the side of the road for a parking lot:

“As the lots were already full, I had to stop my vehicle by the side and wait for the other vehicles to move.

“After waiting for some time, I saw two cars leaving and wanted to proceed to park there.

“Although the gap between my vehicle and his was narrow, the first driver managed to drive off.

“However, as the driver of a black car was getting ready to leave his lot, he accused me of blocking his way and stopping him from leaving.

The driver, who the victim described as a man in his forties, appeared agitate and started shouting at him, reports Shin Min Daily News via Lianhe Zaobao.

The assailant then alighted his vehicle and knocked on his windows furiously.

“When I wound down my window, he immediately punched me in the face six times.

“I could not react in time.

“It was so painful that I was in a daze.

“To defend myself, I took up a can of air freshener and sprayed at his face.

“However, before I could use it, the can was seized from me and he used to it club my head until I started bleeding.”

The victim lodged a police report after the assault.

Reporters reviewing the four-minute-long CCTV footage observed that after the men started arguing, the assailant moved his car forward, alighted and made a rude hand gesture at the victim, while walking towards the victim’s vehicle.

He then went back to his vehicle, grabbed his phone and snapped photos of the victim’s car.

When the victim attended to move his vehicle in front of the assailant’s vehicle to block his car, the assailant moved over and knocked on his window.

After the victim wind down the window, the assailant reached in and punched him.

The police said that the incident was under investigation as a case of Wounding with Intent.

Jes father bore a 4cm-long laceration on his head from the attack.

He was also worried as he was unable to work for a period of time, revealing that after his surgery in the hospital, he had been experiencing headaches and nausea.

“The doctors were worried that I might have a blood clot in my brain after stitching me up and instead that I stay in the hospital for a few days under observation.

“My wife has Parkinson's disease and depends on me for the medical and daily expenses.

He also said that he and his wife currently reside in a rented apartment in Ang Mo Kio and do not wish to trouble his children who already have families of their own.

Jeslyn's brother said that after he found out that their father was attacked he rushed over to the scene.

“My father looked like he was in a sate of shock then.

“The man (assailant) was just standing by the side of the road glaring at us while his female companion stayed in his car, playing her phone.

“Everyone has parents and if your parents were bullied like this, how would you feel?”

He also confirmed that he was considering legal action against the assailant.

Related Stories
M'sian teen dies after bullies assault him and insert blunt object into his anus
90-year-old uncle in wheelchair left bleeding after getting bitten by man at ONE KM
Woman who stabbed ex-BF in AMK lift: "He was already married, wanted me to abort our baby"
More About:
violent
fight
assault
GrabCar