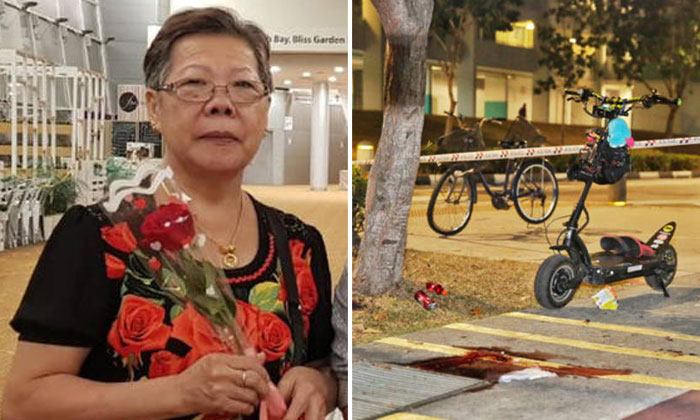 A 65-year-old woman who was seriously injured in an e-scooter accident last Saturday in Bedok died in hospital on Wednesday (Sept 25).

Police confirmed Madam Ong Bee Eng had died. A 20-year-old man was arrested after the accident, and police said they are investigating the case as one of causing death by a rash act.

Madam Ong, a logistics assistant packer, had been in a coma at Changi General Hospital's (CGH) Surgical Intensive Care Unit since she collided with the e-scooter while riding her bicycle.

She suffered a serious brain injury as well as fractures in her ribs and collar bone. Her family was told to prepare for the worst on Monday, after her blood pressure dropped.

On Wednesday night, a steady stream of condolences were offered on her son Ng Chin Khai’s Facebook page, as news of her death spread.

Friends and family described Madam Ong, a widow with two children and two grandchildren, as a helpful and well-respected woman.

Last Saturday, she visited her 88-year-old mother at the Singapore General Hospital, attended a wake, and had dinner at a coffee shop in Kaki Bukit before stopping at a supermarket to buy a few things.

She was on her way home, taking her usual route, when the accident occurred, her younger brother, Andy Ong, 53, had earlier told The Straits Times.

"She has been cycling in the area for almost 30 years, and has never had an accident before," he had said, referring to Madam Ong as dajie, or big sister. "I'm going to lose a sister, such a wonderful sister."

He said she was a generous and caring person. If she was buying groceries home, she would frequently text him to check if he needed anything, as the two live only a block apart in Chai Chee Street.

Her colleagues cried after seeing her in the ward, said Mr Ong.

"She is very well-respected by them, and treats some of them like her children," he added. "Wherever she goes, she makes friends with everyone."