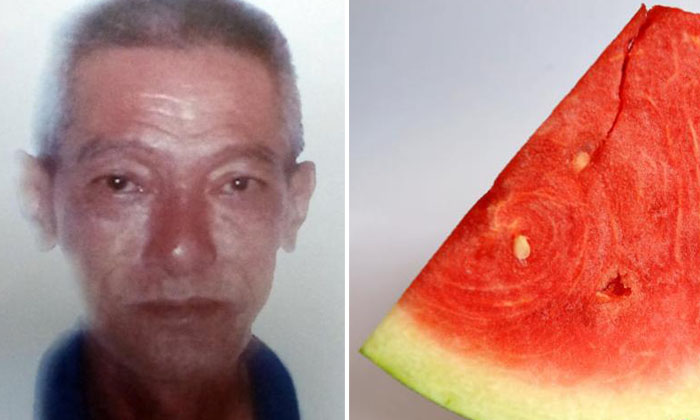 A 65-year-old hospital patient died after pieces of watermelon, served as part of his dinner, got stuck in his throat.

Mr Kline George Verney was found unconscious in his bed at Tan Tock Seng Hospital (TTSH) on Jan 26, 2017, at about 6pm.

Despite efforts to save him, he died about an hour and a half later.

A staff nurse managed to expel three pieces of watermelon, about 3cm long and 1.5cm thick, from his throat.

According to The Straits Times, a doctor later found more watermelon and grains of rice between Mr Verney's vocal cords.

Another three pieces of watermelon were removed with a pair of forceps.

The state coroner explained: "TTSH places patients on 'easy chew' diets due to a variety of reasons, including limited chewing ability, swallowing impairment, a lack of dentition and dentures, or even just personal preference."

Staff nurse Cao Cai Yun noted on Dec 6 that Mr Verney had a full set of teeth, which he told her were his own.

After a review about a month later, on Jan 8, 2017, a dietitian found him to be underweight.

The medical team was recommended to consider switching Mr Verney to a regular diet if there were no clinical contraindications.

According to the state coroner, watermelon is served in small pieces to patients receiving regular diets.

Ms Cao could not find any records stating that Mr Verney required a specific diet when she later looked through his notes for documents containing instructions from doctors or speech therapists.

The staff nurse had observed that Mr Verney had "a full set of teeth and was independent in feeding with no swallowing impairment".

Therefore she indicated in his documents that he was given a regular diet.

However, some of her colleagues recalled seeing him using dentures.

According to Lianhe Zaobao, they said that he had a cup with dentures next to his bed.

Mr Verney's daughter, who was not named in court documents, had confirmed that her father had a habit of eating very quickly and that he would swallow his food with minimal chewing.

Mr Verney also had lumps of rice almost blocking his main bronchi, the passageway to his lungs, showed an autopsy later.

The state coroner said that he died due to an acute airway obstruction by a foreign body.

Lianhe Zaobao reported that the man was waiting to be transferred to a nursing home after he was admitted to hospital.