65-year-old cyclist in e-scooter accident on life support, family told to prepare for the worst 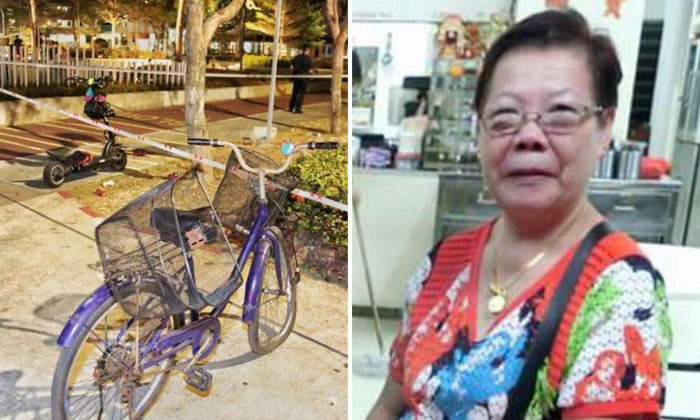 The family of a 65-year-old woman, who is in a coma after the bicycle she was riding collided with an e-scooter, has been told by the hospital to be prepared for the worst.

This is after her blood pressure dropped on Monday morning (Sept 23).

Madam Ong Bee Eng, a logistics assistant packer, was cycling home last Saturday night when she was involved in the accident which left her unconscious.

She has been warded at Changi General Hospital's (CGH) Surgical Intensive Care Unit. More than 100 people streamed in and out to see her on Monday as relatives and friends learnt about her worsening condition.

At least 30 visitors were at the hospital at around 7pm on Monday.

"Doctors told us to ask whoever wanted to see her for the last time to come," Mr Andy Ong, 53, who is Madam Ong's brother, told The Straits Times in Mandarin at the hospital on Monday evening.

Her blood pressure has remained low throughout the day and she is currently on life support, which the family does not plan to remove, said Mr Ong, who declined to give his occupation.

"We hope she will go peacefully," he said, adding that her brain was no longer functioning.

The family is now looking for eyewitnesses to the accident, but none have contacted them, said Madam Ong's elder son Ng Chin Khai, 41, who is unemployed. Madam Ong also has a daughter, and two grandchildren. Her husband died years ago.

She suffered a serious brain injury as well as fractures in her ribs and collar bone after she collided with a 20-year-old male e-scooter rider in Bedok North at around 10.30pm last Saturday night.

The man, who was conscious when he was taken to CGH, was subsequently arrested by the police for causing grievous hurt by rash act.

Last Saturday, Madam Ong visited her 88-year-old mother who is warded at Singapore General Hospital. Later, she attended a wake then had dinner at a coffee shop in Kaki Bukit before stopping at a supermarket to buy some green tea.

It was on the way home afterwards, along a route she has often taken, that the accident occurred, said Mr Ong.

"She has been cycling in the area for almost 30 years, and has never had an accident before. (Saturday's accident was) the one and only time, and she can't wake up (from it). I'm going to lose a sister, such a wonderful sister," said Mr Ong, who referred to Madam Ong, the eldest of his four sisters, as da jie ("big sister" in Mandarin).

He spoke fondly of Madam Ong, describing her as a friendly, generous and caring person. If she was buying groceries home, she would frequently text him to check if he needed any items, as the two live only a block away from each other on Chai Chee Street.

Her colleagues also visited her at the hospital, with many of them crying after seeing her in the ward, said Mr Ong.

"She is very well-respected by them, and treats some of them like her children," he added. "Wherever she goes, she makes friends with everyone."

Madam Ong would also regularly help out at a close friend's kway chap stall, and buy food and items for the needy.

Among the people who visited Madam Ong on Monday was Mr David Tan, 52, a coffee shop operator, who has known her for more than 12 years.

"She is a very helpful woman, and everybody in the Kaki Bukit area knows her. Sometimes, she will also help out at the zichar stall at my coffee shop," said Mr Tan.

A group of five women, friends of Madam Ong's daughter, said they have been visiting the ward a few times since the accident.

One of them, Ms Jeron Goh, 36, who is self-employed, recalled Madam Ong's kindness and generosity: "During Chinese New Year, she will make pineapple tarts and give them to us. She really put in the time and effort - it's so heartfelt."

Related Stories
Female cyclist, 65, in a coma after crash with PMD in Bedok North, 20-year-old rider arrested
Victim of e-scooter accident calls for ban of PMDs at at void decks, lift lobbies
"What are the benefits of PMDs with all these accidents?:" Stomper who nearly got hit by e-bike
More About:
accident
PMDs
e-scooter
coma
injured
elderly
cyclist