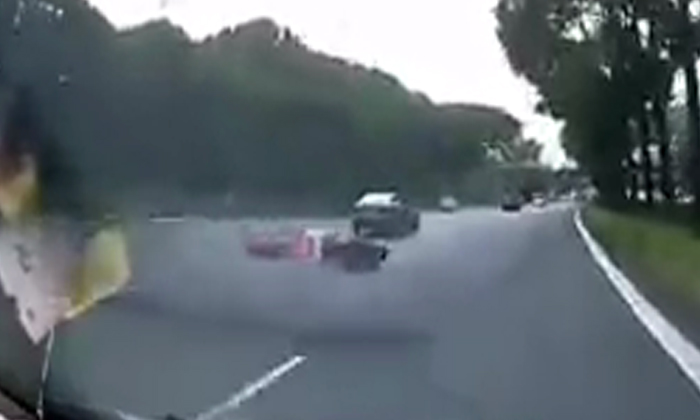 A 64-year-old motorcyclist was taken to hospital after a hit-and-run accident along the Central Expressway (CTE) on Friday (June 12).

Videos posted on Facebook show how the motorcyclist was knocked off his bike and sent sprawling on the road after being hit by a car.

Facebook user Rin WeiQin, who uploaded the videos, said that the car driver had "cut lanes without caution", then "sped off and cut lanes recklessly before escaping at Bukit Timah exit".

She also said that a police report has been made.

in response to queries by Stomp, the police said they were alerted to a hit-and-run accident involving a car and a motorcycle along the CTE, towards Seletar Expressway (SLE), at 11.15am.

The male motorcyclist was conscious when taken to Raffles Hospital.

Related Stories
Family appealing for witnesses after woman knocked down to ground by car at Punggol Field
Kind soul stops to help fallen rider involved in alleged hit-and-run at Tampines
Family looking for driver who knocked down woman at Changi Business Park in hit-and-run
More About:
accident
hit-and-run