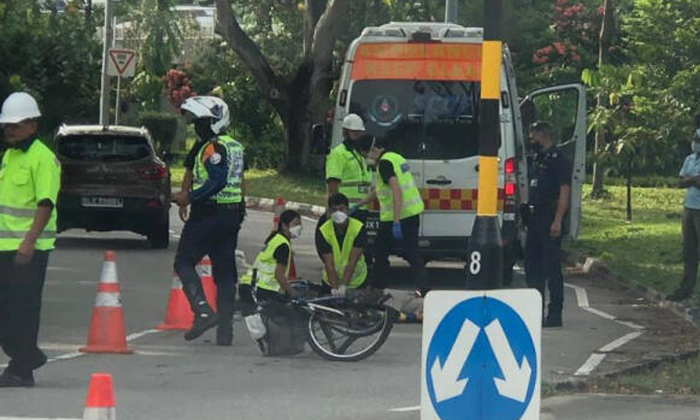 A 64-year-old man died after the bicycle he was on collided with a lorry at a zebra crossing in Eunos on Saturday (April 16).

Photos on Facebook show paramedics attempting to resuscitate a man at the scene, while a bicycle, with one wheel bent out of shape, is seen lying on the road.

The Singapore Civil Defence Force said they responded to a traffic accident along Jalan Eunos at the slip road towards the Pan Island Expressway on Saturday at about 5pm.

The man was unconscious when taken to Changi General Hospital, but succumbed to his injuries and died in hospital, the police told zaobao.com.sg.

An eyewitness said the cyclist was seen without a helmet and there was blood on the ground after the accident.

The lorry driver, a 27-year-old man, was arrested for reckless driving causing death. Investigations are ongoing.

News of the accident sparked heated discussions online, with some pointing the finger at cyclists and saying they should dismount and push their bicycles when making their way across pedestrian crossings.

Others, however, felt that zebra crossings should not be built near the filter lanes to expressways.