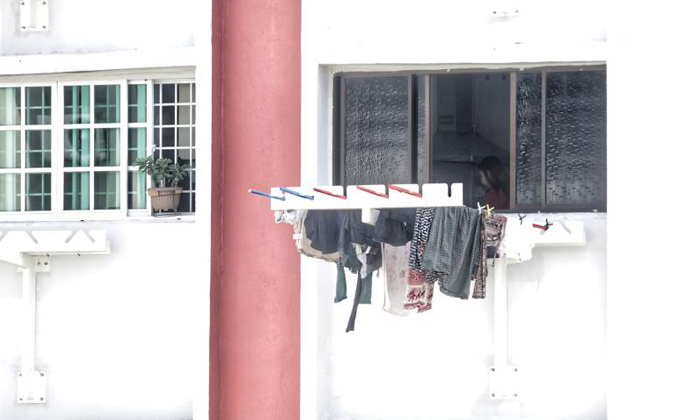 One person heard a six-year-old girl crying alone. Another saw her peering out of the bedroom window.

On Tuesday (June 4) afternoon, the girl, who was apparently alone at home, died after reportedly falling from the eleventh storey of a Housing Board block.

Paramedics pronounced her dead after they arrived at Block 637 Ang Mo Kio Avenue 6. Police were alerted to the death at 5.38pm, and investigations are ongoing.

Neighbours told The Straits Times on Wednesday that the girl lived in the unit with her parents and older brother.

They described the girl as quiet and obedient. She was mostly seen at a nearby playground with her mother in the evenings.

"The girl and her brother were very well behaved," said a neighbour who declined to be named.

"They were not rowdy... and seemed to get along well."

A neighbour who lives on the same floor as the family said she had seen the girl at about 5pm on Tuesday on coming out of the lift.

She said the front door was locked and the girl was peering out of her bedroom window, which faces the corridor.

"I did not spot her at first and got a bit of a scare when I saw her," she said, adding that she did not find anything amiss and so went inside her home.

A maid who lives in the opposite block said she heard the girl crying for her father about two hours before her fall.

The maid, who gave her name only as Letecia, said: "She was crying for about 10 minutes at about 3pm. I could see her from the kitchen."

She added that the window grilles in the kitchen were open.

About an hour later, Ms Letecia, 53, heard the girl's cries again and saw her looking out of the kitchen window, seemingly in search of her father.

The cries were heard again after 5pm when Ms Letecia was preparing dinner.

This time, there was a loud sound before the cries suddenly stopped.

When she looked out of the window, the girl was lying motionless on the ground, she said.

No one answered the door when reporters visited the flat yesterday afternoon.

The girl's parents had moved into the unit after they got married around eight years ago, said a neighbour. Both parents work and take turns sending their son to primary school and their daughter to a childcare centre, she added.

Chinese newspaper Lianhe Wanbao reported that a woman at the scene broke down in tears, and was too distraught to speak to the police.

Related Stories
5-year-old boy falls to his death after getting locked in parents' 8th-floor office at Woodlands
Maid falls 4 storeys from Bishan block, says she does not remember what happened
Filipino girl, 4, falls four storeys from Tampines flat after being left alone at home
More About:
death
dead
flat
child