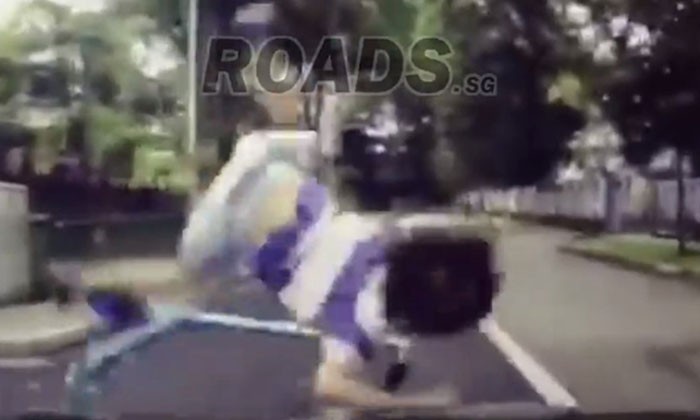 A 6-year-old boy was hit by a car while riding a kick scooter along Leedon Road on Oct 3 at around 4.40pm.

In a video of what happened posted on ROADS.sg, the driver who hit the boy can first be seen turning into Leedon Road.

As he was negotiating a bend outside Saint James Church, the boy rode onto the road against the flow of traffic in front of the car from a pavement. He looked to be unaccompanied at that point.

The driver could not jam on his brakes in time, and crashed into the young kick scooter rider head-on.

The boy was sent flying due to the impact and fell onto the road. A woman then ran to check on him as he cried in pain.

According to a caption on the video, the boy did not sustain any major injuries.

"Boy just came onto road with scooter and I could not avoid hitting him.

"Mother was not supervising him while scooting along this road.

"I called the police and SCDF (Singapore Civil Defence Force) ambulance brought mother and boy to the hospital.

"He is said to have sustained scratches and bruises only, wishing him a speedy and full recovery."

Said a spokesman for the police in response to a Stomp query:

"A 6-year-old boy was conscious when conveyed to the National University Hospital.

Related Stories
Cyclist sent flying after getting hit by driver -- who 'ran away' but left behind licence plate
Cabby whose taxi got rammed into by 'wrecking ball' car at Bukit Batok: "I almost wanted to faint"
Lorry driver swerves to avoid motorist who was changing lanes on PIE -- then gets hit by another car
More About:
Accidents
reckless
injured