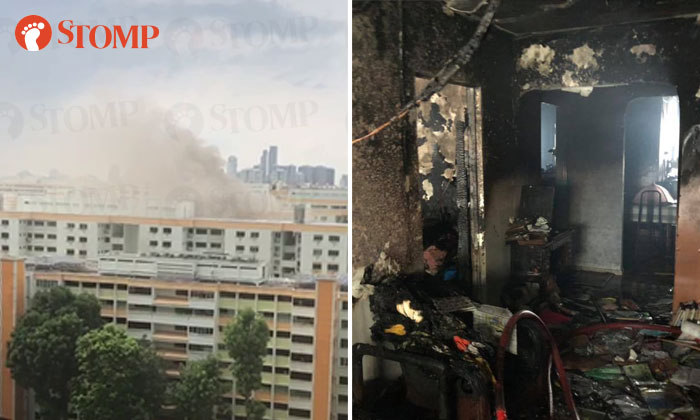 Six people, including a Singapore Civil Defence Force (SCDF) firefighter, were taken to hospital after a raging fire broke out in a fifth-storey unit at Block 159 Woodlands Street 13 on Tuesday afternoon (Apr 9).

Preliminary investigations showed that a personal mobility device (PMD) that was left charging in a bedroom was the cause of the fire.

Stompers Angel and Ali alerted Stomp to the fire and shared photos and videos of the incident.

In one of the videos, thick smoke is seen drifting above Block 159.

The SCDF posted a statement regarding the fire incident on their Facebook page at about 5.56pm.

It said SCDF responded to the fire at about 3.25pm.

"SCDF firefighters conducted forced entry into the unit," it said.

"The fire which was raging, involved contents of a bedroom and the living room.

"SCDF rescued four occupants (a woman, teenager and two children) who were trapped in the kitchen area.

"Five other occupants in the neighbouring units were also evacuated.

"The teenager had suffered burn injuries to his back and left shoulder and was conveyed to Singapore General Hospital (SGH).

"Two women and two children were also conveyed to SGH and KK Women’s and Children’s Hospital respectively for smoke inhalation.

"An SCDF firefighter, while conducting the rescue had suffered minor burn injuries to his left shoulder and he was conveyed to SGH."

The fire was extinguished with two water jets.

In its post, SCDF provided fire safety tips to remind the public on the prevention of PMD fires.

Angel also wanted to praise the heartwarming kindness demonstrated by a GrabFood delivery guy who looked after an elderly woman in a wheelchair who was evacuated during the fire.

In a video shared by Angel, the delivery guy is seen being assisted by SCDF officer as he pushed the woman to a void deck.

"The authorities evacuated the lady and pushed her to the carpark and the GrabFood guy took care of her from there," said Angel.

"He helped the women get to a sheltered area as it was drizzling," said Angel.