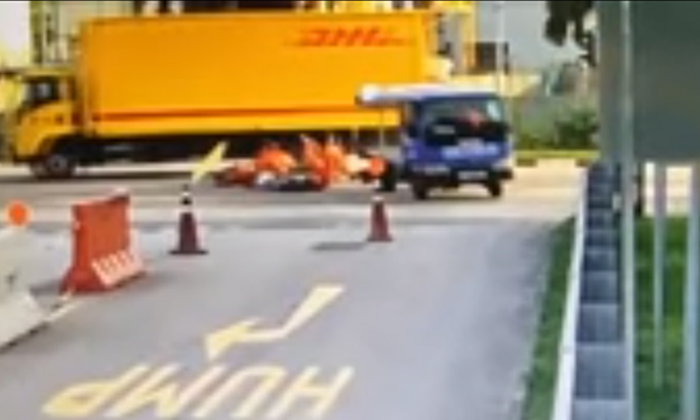 Six men were flung off the back of a blue lorry as a DHL truck collided into its rear at Tanah Merah on Thursday (June 27).

The Singapore Civil Defence Force (SCDF) told Stomp that they responded to an accident near 70 Tanah Merah Coast Road at about 8.05am.

A video of the accident was shared on a Facebook page, SG Road Vigilante.

The video shows both vehicles going in the same direction as the DHL truck collides with the rear end of the blue lorry.

The blue lorry swerves due to the impact as six men in orange work attire fall off its back and land on the road.

While the lorry mounts a curb and stops, four of the men get up and two of them move towards a grass patch to lie down.

The other two then return to help the remaining men who are still lying on the road.

SCDF said to Stomp that six people were conveyed to Changi General Hospital.

The police said they were alerted to the accident and confirmed that six people aged between 31 and 40 were conscious when they were conveyed to the hospital.

DHL told The Straits Times that they are aware of the incident and clarified that a subcontractor was operating the vehicle on behalf of the company.

A DHL spokesman said: "To our knowledge, two passengers from the other vehicle have been warded at the hospital.

"The subcontractor has made a police report and is currently assisting the police with their investigations.

Road safety is of paramount importance for DHL operations, and we will be reviewing the safety standards with our partners and subcontractors."