6 men arrested after fight breaks out in Little India 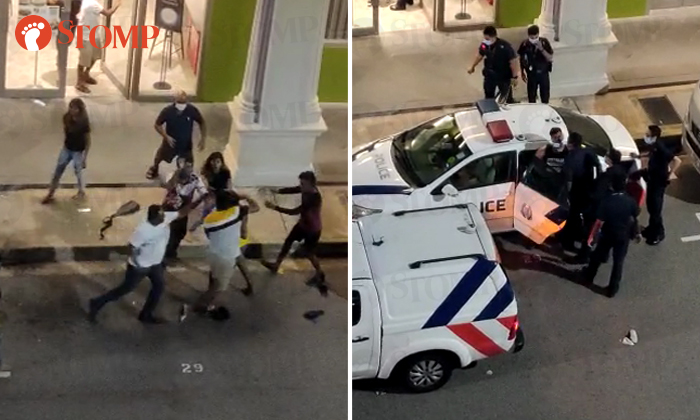 Six men, aged between 18 and 48, were arrested after a fight broke out along Upper Weld Road in Little India on Saturday night (May 2).

Stomper Swaminathan, a resident in the vicinity, called the police and took videos of the incident.

He told Stomp: "I gave the police an incident report and showed them all the videos."

The videos show a large group of people involved in a dispute, though the cause of the altercation is unclear.

In response to a Stomp query, the police said they received a call for assistance along 15 Upper Weld Road at 10.56pm.

"Five men, aged between 18 and 48, were arrested for affray," a police spokesman told Stomp.

"A 21-year-old man was arrested for affray and using criminal force to deter a public servant from discharge of his duty."

Stomper Swaminathan said: "One of the guys was so rude.

"He didn't want to get inside the police car. The police had already handcuffed him and asked him to sit inside but he said that his leg was fractured and therefore couldn't sit.

"He asked for his handcuffs to be removed then can sit inside. But when the police did so, he shouted and spat at them before being pushed into the car."

No injuries were reported and police are investigating the incident.