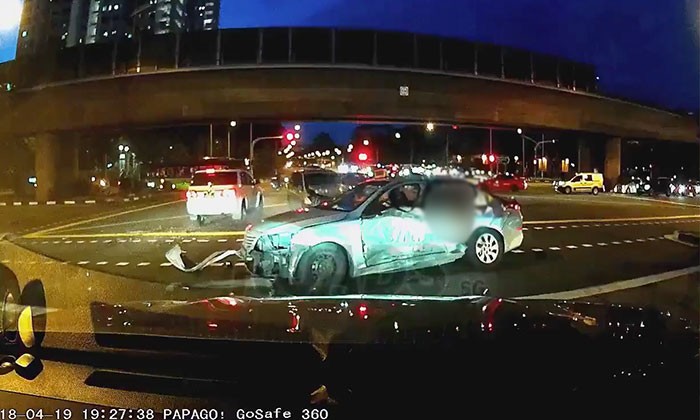 A 19-year-old undergraduate from the National University of Singapore (NUS) was killed after she was nearly flung out of a cab in an accident with a Toyota at the junction of Clementi Road and Commonwealth Avenue West on Thursday (April 19) at around 7.30pm.

Five others were injured, including the two drivers and three other passengers of the cab.

All passengers on board the cab are NUS students.

One of the students was trapped in the cab and had to be extricated by the Singapore Civil Defence Force (SCDF).

Stomper Dale was driving along Clementi Road at 9pm when he came across the aftermath of the accident.

He took a photo of the damaged Silvercab, its sides evidently smashed in.

According to Dale, the scene was swarming with police officers. He also saw two police patrol cars and three patrol bikes, along with two ambulances at the scene.

Said Dale: "The traffic was congested as three of the five lanes were closed.

"There were so many officers at the scene I couldn't take a photo of the Toyota.

"When I saw how far the cab moved and how damaged it was, I said some prayers for the drivers and passengers.

"It was quite shocking."

A video of the accident was uploaded on Road.sg's Facebook page, showing the moment when the Toyota collided with the cab.

A passenger, presumably the 19-year-old deceased, is seen nearly thrown out of the car following the impact.

Stomp has edited the original video due to its graphic nature.

Another video showing the accident from another perspective is also circulating on WhatsApp.

In a video shared on WhatsApp group PHV Driver Sharing GC, the Toyota is seen ramming into the cab from the side.

The deceased is Ms Kathy Ong, an undergraduate at the National University of Singapore (NUS), reports The Straits Times.

NUS confirmed the accident in a statement on Friday, adding that one of the students was seriously injured.

The remaining two are in stable condition.

An official statement was posted on NUS's Facebook page, which read:

"The university is deeply saddened by the accident.

"University staff and counsellors are in touch with the family and friends of the four students involved to provide support and assistance.

"Our thoughts are with them during this difficult time."

In response to a Stomp query, the SCDF said that it was alerted to an accident at 7.30pm.

A 22-year-old man, believed to a taxi passenger, was extricated by SCDF using hydraulic rescue tools after getting trapped in the vehicle.

The man was conveyed to National University Hospital (NUH) for treatment, along with three other passengers and the drivers of both vehicles.

He was among the four people who were conscious during conveyance to the hospital, reports The Straits Times.

The remaining two were unconscious.

Other photos of the accident show a badly damaged silver Toyota and the Silvercab being towed away. Debris and glass shards littered the scene. The police said that it was alerted to the accident involving a car and a taxi along the junction of Clementi Road and Commonwealth Avenue West on April 19 at 7.27pm.

Said the spokesman: "Both drivers and four taxi passengers were conveyed to NUH.

"One of the passengers, a 19-year-old woman, succumbed to her injuries and was subsequently pronounced dead at the hospital.