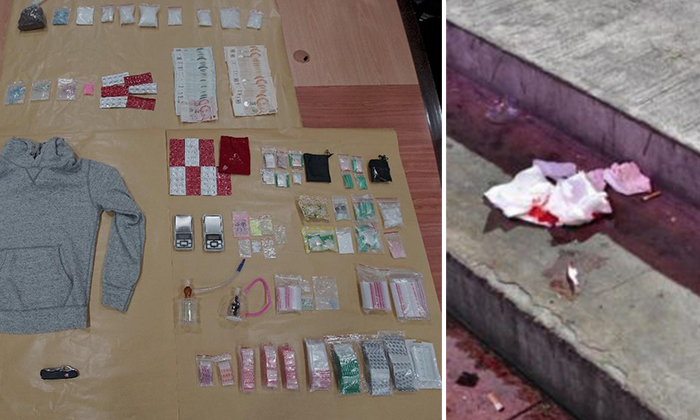 Six people, aged between 20 and 53, were arrested for stabbing 2 men and suspected drug-related offences in a joint operation conducted on August 30 and 31

In the joint operation, the Singapore Police Force (SPF), supported by the Central Narcotics Bureau (CNB), arrested five men and one woman involved in the offences mentioned above.

At about 1.25am on Friday (Aug 30), the police were alerted to a case of assault with a weapon along Geylang Road.

Two men, aged 24 and 26, sustained serious injuries and were conveyed to the hospital.

Photos by The Straits Times show blood-stained tissue paper on a pavement.

With ground enquiries and images from police cameras, officers from Bedok Police Division established the identities and possible locations of the suspects.

From within the hotel room in the vicinity of Jalan Sultan where the 53-year-old man was arrested on Aug 31, about 5g of ‘Ice’ and five ‘Ecstasy’ tablets were recovered.

A subsequent search by CNB officers of his hideout in the vicinity of North Bridge Road saw the recovery of about 166g ‘Ice’, 75 Erimin-5 tablets, 25 ‘Ecstasy’ tablets, 25g ketamine, improvised drug utensils and two weighing scales.

During the operation, another two men and one woman, aged between 20 and 32, were arrested for suspected drug-related offences.

The 32-year-old woman and the two men, aged 37-year-old and 53-year-old, were charged in court on Saturday (Aug 31) for drug trafficking.

If convicted of voluntarily causing hurt with a dangerous weapon, they may be punished with a jail term of up to seven years and/or fine and/or caning.

489g of ‘Ice’ is sufficient to feed the addiction of about 280 abusers in a week. The drugs seized in this operation is worth more than S$67,000.