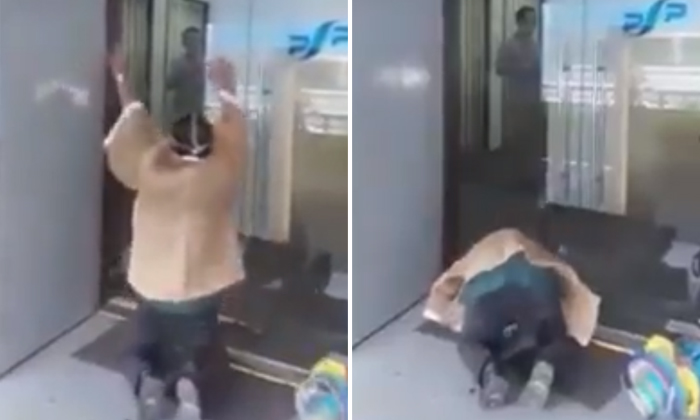 A 59-year-old man wore traditional Chinese funeral attire to collect a debt from an engineering company in Ang Mo Kio.

The man, Bai Feng Wei, was charged in court on Tuesday (June 25) for causing public nuisance and may also be charged for harassment.

Over five days, the debt collector appeared at the company's doorstep four times to collect a sum of $170,000.

He wore traditional Chinese funeral attire, knelt and even kowtowed.

A video of Bai was posted on a Facebook page, 是华人就进来 Chinese Page 是華人就進來

In the video, Bai can be seen walking down a corridor and stopping to kneel in front of a glass door.

A man in the office sees the scene and proceeds to film it, to which Bai said: "Tolong ah tolong ah, please don't film me!"

As Bai continues shouting the same lines repeatedly, a woman appears at the doorstep with the man to hand a piece of paper to Bai.

Bai hands the sheet of paper to the person filming, but it is unclear what is on the document.

According to Lianhe Zaobao, Bai was arrested along with a 47-year-old man on May 31, but allegedly committed another act on Friday (June 21). At about 4.30pm, Bai was at the doorstep of the engineering company wearing a top and holding banners that had a picture of the director of the company.

When interviewed, Bai's client, a renovation company, said that a lawyer could be engaged to help with Bai's case.

They added that they would continue engaging Bai for debt recovery services, emphasising their support for Bai and how he does not resort to methods of violence.

Mr Ng, the boss of the engineering company said to Lianhe Zaobao: "I applied for a protection order a few days ago. Anyway, I'll call the police each time I see him and will leave the rest to the police."

Ng said that the contractor had failed to provide warranty services and even requested payment of about $170,000 for services that were not included in the contract.

He insists that he will not be forking out that sum and has already sent a lawyer's letter to the contractor's company, but he has not gotten any response.

When interviewed by Wanbao, Bai said that if the police thought it was unsuitable for one to recover debts dressed in traditional funeral clothing, he would wear something "nicer" in the future.

Bai said that he got bored of going to the engineering company's doorstep and went to the director's condominium instead.

Donned in a hat and a mask, Bai rode a bicycle with posters outside the premises. The posters were stuck with pictures of Ng incense paper with some labelled: "Return us our hard-earned money."

Prosecution states that the police will need about two weeks to complete investigations where Bai could be facing more charges.

Police investigations are ongoing and the case will be heard in court again on July 9.