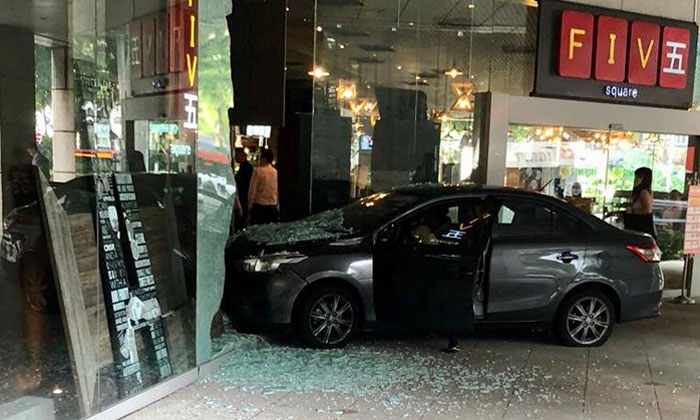 A 53-year-old woman was taken to hospital after the car she was driving crashed into a restaurant along Pickering Street on Thursday morning (Sep 13).

The black Toyota had crashed into Five Square, a bar located at the Great Eastern Centre.

Stomper Dean shared photos of the incident that have been circulating on social media showing shattered glass scattered on the ground around the car.

A video of the moment the driver mounted the kerb and crashed into the bar's glass facade was uploaded on ROADS.sg's Facebook page.

Update: 53 year old lady passenger was hurt and sent to hospital conscious. Driver was not hurt.
Wishing lady a speedy...

Posted by ROADS.sg on Wednesday, 12 September 2018

Several passers-by are seen rushing towards the vehicle to offer assistance following the accident.

In response to a Stomp media query, the police said that they were alerted to the accident at about 9.42am.

"A 53-year-old woman was conscious when conveyed to Singapore General Hospital," a spokesman said.

According to The Straits Times (ST), the woman suffered minor injuries.

ST understands that there is no suspicion of drink driving and that the driver had lost control of the vehicle.

As for the bar, Five Square took to its Facebook with good humour to assure customers that it is business as usual.

"No, we are not launching a new drive-through service nor is this an F1 display. We had a small accident this morning but thank God no one was hurt. Operations are not affected and it is business as usual. So come on down, soak up the F1 atmosphere at Five Square and have a smashing good time."

Related Stories
Driver, 59, arrested for drink-driving after getting into accident following police chase at Telok Blangah
Man, 61, arrested for drink-driving after 2 lorries collide in Yishun
2 riders taken to hospital after getting hit by driver who made last-minute lane change along SLE
More About:
car crash
Accidents
shattered glass
restaurant