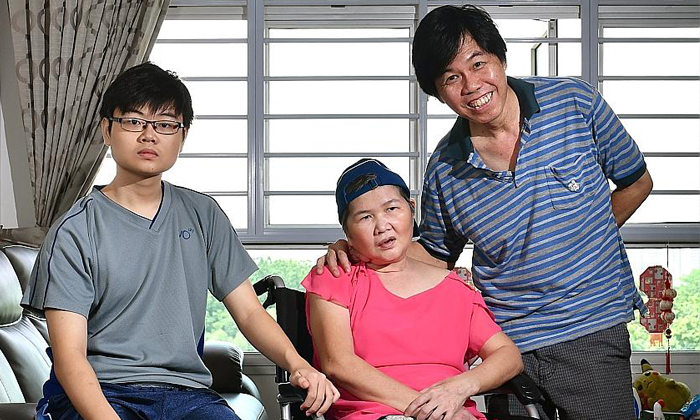 It was a special Christmas for the Leong family as mum returned after being in hospital for three months.

Madam Ang Liu Kiow, 53, had been in a coma after an accident on Sept 17 involving a 17-year-old on an electric scooter on a pavement along Pasir Ris Drive 1.

Last Friday, she defied the odds when she was discharged to spend the festive season with her family.

Doctors at Changi General Hospital had said her chances of waking up were slim and the family had prepared for the worst. She had two brain operations and suffered multiple mini strokes.

Madam Ang gradually woke up from the coma in October, and can now move and utter short words. She is still learning to stand and walk, and has to use a wheelchair.

Speaking to The Straits Times on Christmas Eve, odd-job worker Leong Loon Wah, 53, said: "I'm happy that my wife is home, and just want her to get better."

He said she began to show signs of consciousness in early October.

"She could open her eyes and it was like a ray of hope for us. Doctors and other medical staff then said that she can try physiotherapy, and she has responded well to it."

Mr Leong had spent two hours a day at his wife's bedside while she lay unconscious in the intensive care unit on life support. He massaged her, willing her to get better.

Their son, Dominic, 16, recently got his N-level results from Coral Secondary School. He did well, scoring nine points. He said his father, who cried in the hospital, grew more optimistic as his mum started to get better. The couple also have a daughter, 26, a nurse, and another son, 22, a university student.

The family believes Madam Ang, a housewife, was out to run errands when the accident happened.

The teen has been arrested and police investigations are ongoing. The episode led to calls for stiffer rules to prevent repeats of such incidents, as well as for users of personal mobility devices (PMDs) to buy third-party insurance.

From May to October, the Land Transport Authority issued more than 860 advisories to people found riding bicycles, e-bikes and other PMDs dangerously on footpaths and cycling paths.

The family members have not heard from the teen, but Mr Leong said they are not angry. "We still don't know who is right or wrong."

A maid has been hired for Madam Ang, who no longer has to be tube-fed and can eat soft foods like porridge.

Her medical and hospitalisation fees total more than $100,000, most of it paid via financial aid schemes. The family is checking if insurance can cover other costs. Mr Leong, who earns just over $1,000 a month, is worried about his wife's physiotherapy costs, but says they can get by if they try to save.

"No matter how tough it gets, I'll want to take care of her and stay by her side. After all, we've spent so many years of our lives together," said Mr Leong. They will mark their 30th wedding anniversary in May.