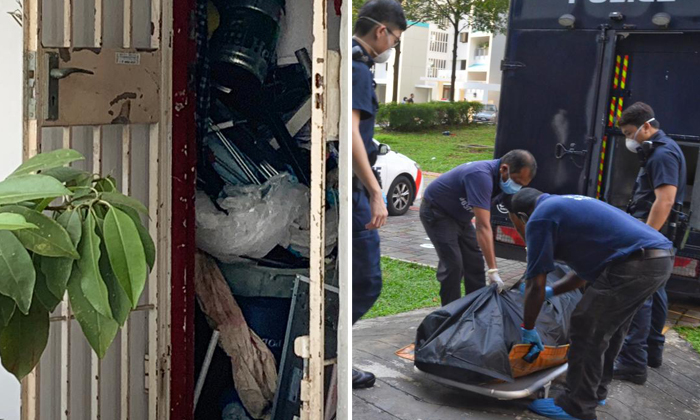 A 53-year-old man who lived alone was found dead in his flat at Block 32 Marsiling Drive on Monday afternoon (Nov 4).

In response to a Stomp query, the police said they were alerted to the unnatural death at 1.15pm.

A police spokesman added: "The man was found lying motionless inside the building and was pronounced dead by paramedics at the scene."

Shin Min Daily News identified the deceased as Mr Lin Qui Na, who lived alone in a three-room flat on the sixth floor. His body was reportedly discovered in the bedroom.

When reporters visited the flat, they saw various household items such as tables, chairs, Styrofoam boxes and vacuum cleaners stacked up to the ceiling.

There were also bed frames and mattresses cluttering the corridor.

Residents living on the same floor said that police had difficulty entering the flat after unlocking its door and had to forcefully push it open.

A resident, who declined to be named, told Shin Min that Mr Lin had lived here for more than 20 years and was last seen five days ago, hanging a packet of rice on a bicycle outside his flat.

He said: "When I came back from Malaysia five days later, the packet of rice was still there.

"I also smelt a foul odour but could not tell if the rice had gone bad or if something was rotting.

"As the flat's windows were shut, I did not think much of it."

Mr Liu, a 74-year-old retiree living upstairs, said the deceased had been hoarding items for over 10 years, and would even bring home refrigerators and washing machines.

"He looked thinner and seemed tired when I ran into him last week," added Mr Liu.

"I noticed a stench the day before in the afternoon. I thought it was a dead bird, but did not expect that Mr Lin had died at home."