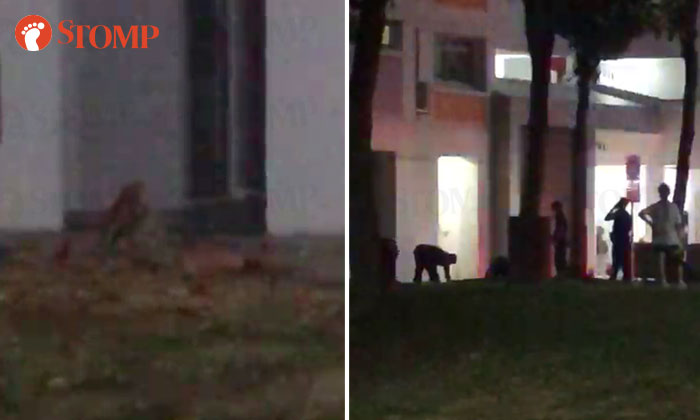 A 51-year-old man was taken to hospital and subsequently arrested after he was found lying down at the foot of Block 850 Jurong West Street 81 on Thursday evening (Feb 28).

Stomper Bryan alerted Stomp to the incident and shared videos he took at the scene.

In the video, the man is heard shouting and waving his arms in the air as he lies on a grass patch at the foot of the Housing and Development Board (HDB) block.

"The man was lying down on the grass and yelling non-stop for almost 30 minutes," said Bryan.

"When the police and Singapore Civil Defence Force (SCDF) came, he was not making any more noise."

The SCDF told Stomp it responded to a call for medical assistance at the said location at about 9.15pm.

In response to a Stomp media query, the police said it was alerted to a case of attempted suicide at about 9.15pm.

A 51-year-old man was conscious when taken to National University Hospital (NUH), a police spokesman said.

He was subsequently arrested in relation to the case.

Related Stories
Mother and daughter found dead at foot of Toh Guan block on second day of CNY
2-year-old boy who fell from 11th-floor Sengkang flat was possibly saved by his diapers
Maid falls 4 storeys from Bishan block, says she does not remember what happened
More About:
attempted suicide
arrested
injured