$500 GrabFood order from Shake Shack thrown away at Jewel? Netizens have questions and theories 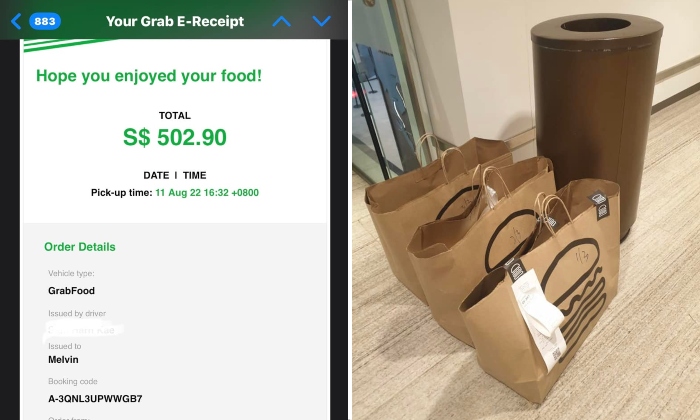 Five hundred dollars is a lot to pay for food. Worse is to not get it.

Ever since Facebook user Melvin Twj posted about it on Sept 2, the saga of his $500 GrabFood order from Shake Shack ending up next to a bin in the basement of Jewel Changi Airport (or did it?) has gone viral. The post has been shared more than 1,000 times.

The story has a number of twists and turns, like Game Of Thrones but with burgers.

Then Grab claimed the driver was aware of the location but could not contact Melvin. "But the strange thing was that there was no chat history found on my phone at all," said Melvin in his post.

So the driver was advised by the company to dispose of the food.

"Hence, the Grab agent suggested that if there was no safe place around the location, dispose of the items."

Melvin shared a photo of three large Shake Shack paper bags next to a bin, presumably sent to him by Grab to show that the food was disposed of.

Melvin ended his post with a few questions, such as:

In a screenshot of Melvin’s chat with Grab, he was told he would be getting only a $50 refund in his GrabPay wallet.

Even Shake Shack reached out.

Netizens have their own questions as well as theories.

One veteran food delivery rider told Stomp his theory: "Most riders, after taking the photo of the food disposal, will take back the food to consume or pass to fellow riders if the quantity of the food is too much just like what happened to the $500 Shake Shack order." 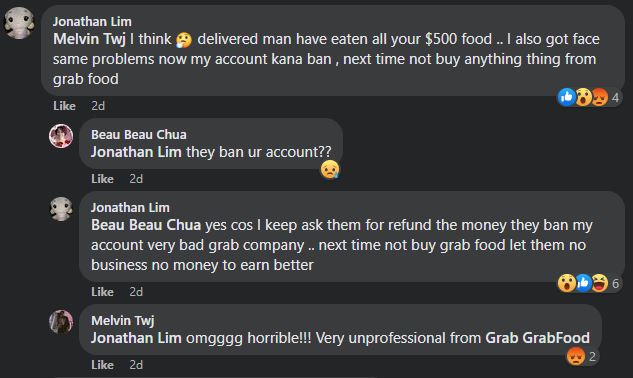 A few netizens wondered where the delivery location was. 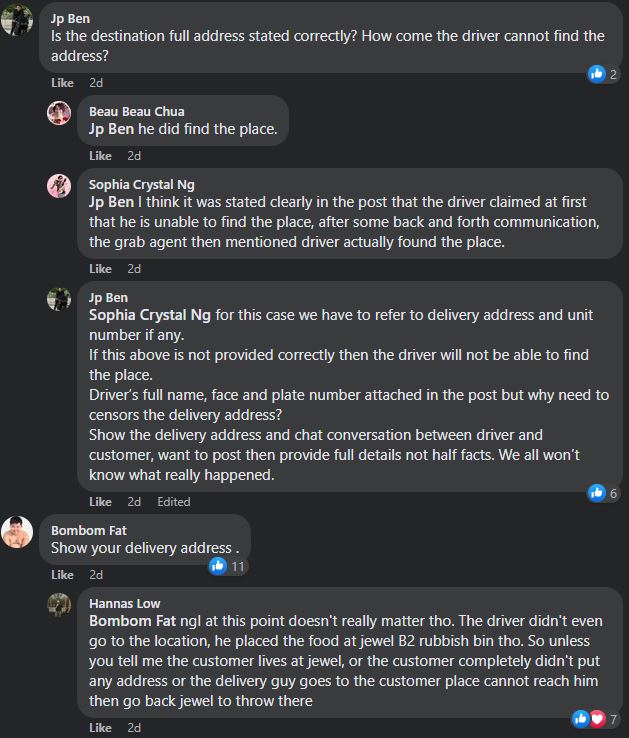 One commenter mentioned Changi Naval Base, which makes sense since Melvin can be seen in Instagram posts wearing T-shirts with the Republic of Singapore Navy emblem and the naval base is relatively close to Jewel Changi Airport.

When contacted by Stomp, Melvin said he was not comfortable disclosing the exact location "due to security reasons" but said it was at Tanah Merah Coast.

Related Stories
Jurong West man shocked to find his GrabFood order on floor next to his slippers
GrabFood rider delivers meal to wrong address but when customer finally gets it, it's not what she ordered
Angry at your delivery rider for taking so long with your food? Think twice
More About:
GrabFood
unsatisfied customers
dispute
facebook
food delivery