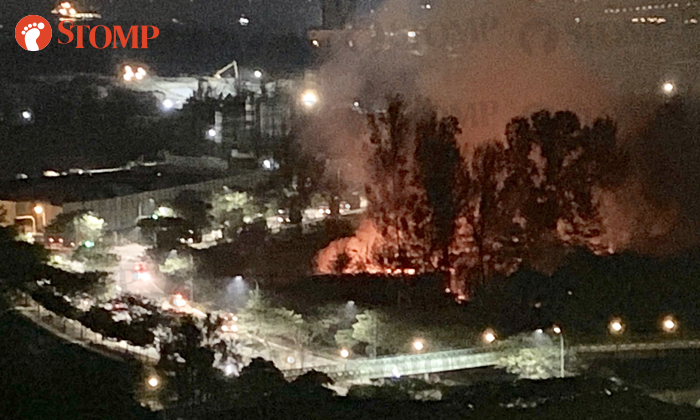 A vegetation fire that was around the size of two football fields broke out near Marina East Drive on Monday night (Aug 12).

Stomper Teo, who took a photo of the blaze, was on his balcony at home when he noticed the fire.

He told Stomp: "The fire was quite big and there was a lot of smoke."

In a Facebook post, the Singapore Civil Defence Force (SCDF) said it responded to the vegetation fire at about 8.50pm.

Around 50 firefighters and 12 emergency vehicles were deployed.

The SCDF surrounded the fire with seven water jets and brought it under control at 10.30pm.

This comes after two vegetation fires broke out on Sunday afternoon (Aug 11) at Jurong Road and along Pang Sua Canal.

The National Environment Agency's Meteorological Service Singapore said earlier this month that it forecasts drier-than-normal weather conditions here and in the surrounding region in the coming weeks, following a record dry July.

According to The Straits Times, drier weather can be expected from August to October this year.