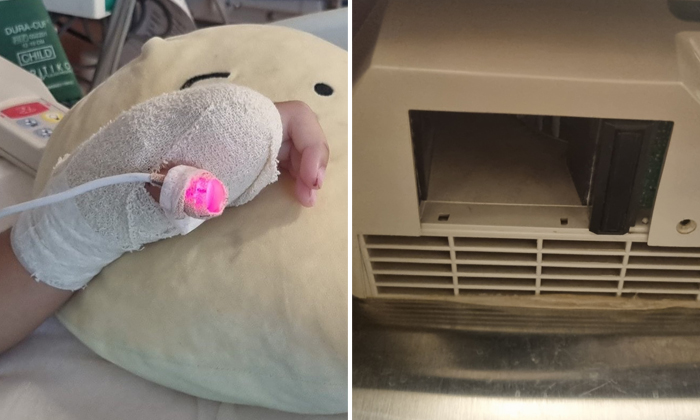 A hand dryer in an Ion Orchard toilet shattered a five-year-old girl's finger on Monday night (Dec 6), severing more than half of her left index finger.

She was in the toilet with her helper and twin sisters, aged nine, after her family had dinner in the mall.

She had placed her hand in the dryer, which was missing a vent cover. Within seconds, the index finger on her left hand was mangled by the dryer's fan blades.

Her father, Mr Nick Chia, told The Straits Times on Friday (Dec 10) that he heard screaming from the toilet and knew something was wrong.

The helper called him and said his daughter had lost her finger, and the family rushed into the toilet to see the girl, Kara, holding her hand and screaming.

Mr Chia, 35, said his daughter had two operations on Tuesday and Thursday that left her left index finger a stump. She has been discharged from hospital with her finger bandaged and is on painkillers.

Her parents are now worried about her mental health and are weighing their next steps.

“She hasn't seen her hand without the bandages; she’s just happy to be back home with her siblings,” said Mr Chia.

"Reality hasn't sunk in for her."

The father of three girls and one boy, aged eight, said the hand dryer was in use even though it was missing its vent cover.

Mall staff who came to their assistance could not locate the key to the cabinet housing the dryer and had to manually pry it open to retrieve the child's broken finger parts, said Mr Chia.

"The staff were staring at each other dumbfounded and so helpless and I was just asking why, who the hell allowed this to happen?" he added.

"I was just standing there, scooping up my daughter's bone fragments and holding it in my hands, hoping there would be some way her finger could be salvaged."

He questioned the mall's "oversight" for not switching off the hand dryer despite the fault, adding that it could easily have been mistaken for a napkin dispenser by children.

A spokesman from Ion Orchard said the hand dryer has been replaced and the mall is investigating the incident, adding that it has been in touch with the affected family.

It has also checked all the hand dryers in the mall to ensure their safety, the spokesman said.

Mr Chia said he is concerned about Kara's future and the social stigma she may face having lost her finger.

"Her entire future is ahead of her. I'm worried about how she's going to cope going forward, especially when she's a teenager and more self conscious, and an adult, how people will see her and how her opportunities in life will be affected."

Mr Chia, who works in the automotive sector, said it was a traumatic experience and a difficult week in the hospital, where he and his wife, 31, took turns accompanying Kara at her bedside.

When asked about his next steps, he said: "I'm still trying to collect myself. I really don't know what to make of it. We're broken."

"It's not something I would wish on any child or any parent. No one should ever have to go through this."

Related Stories
'I actually thought I was going to die': Man who was attacked by otters at Botanic Gardens
Girl, 3, suffers deep cut on face after attack by pet peacock in Serangoon
Stomper helps elderly man found lying in pool of blood at Yishun HDB void deck
More About:
injured
child
safety
dangerous