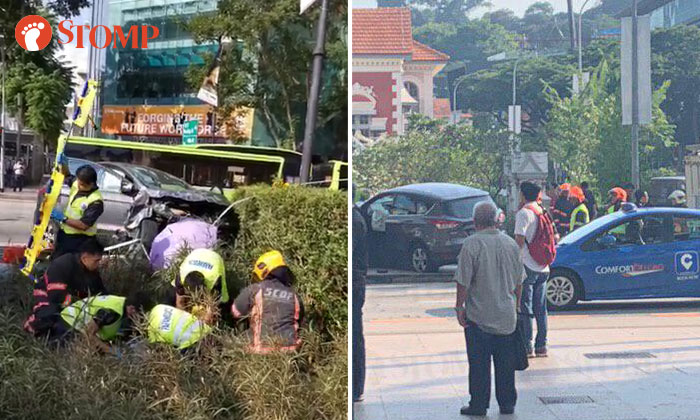 Three men and two women were taken to hospital after an accident involving four cars and a pedestrian occurred along Bras Basah Road towards Nicoll Highway on Wedensday afternoon (Aug 21).

Stomper Joseph and Melon alerted Stomp to the incident and shared photos and a video taken at the scene.

"There was blood all over the fence outside Chijmes," said Melon.

In a video shared by Joseph, paramedics can be seen bent over a person lying in the grass.

A damaged grey car is a few metres away.

In response to a Stomp query, the police said they were alerted to the accident at 4.25pm.

"Two male drivers, aged 54 and 56, and two female passengers, aged 23 and 38, were conscious when conveyed to Raffles Hospital," a police spokesman said.

"A 36-year-old male pedestrian was conscious when conveyed to Singapore General Hospital."