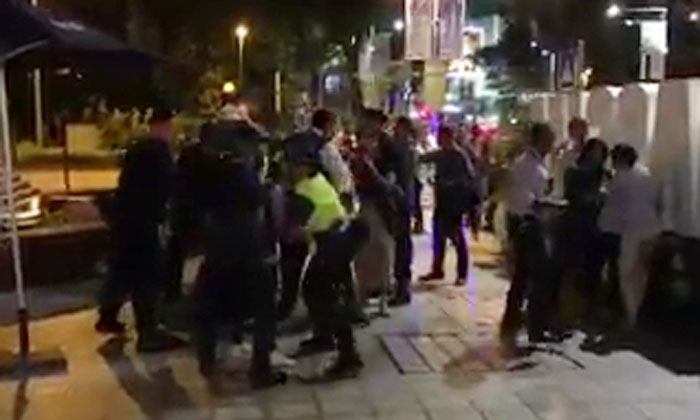 Five South Korean women were arrested on Monday (June 11) for causing trouble in Orchard Road which was a demarcated special zone for the Trump-Kim Summit.

A video of the women being apprehended by police officers was posted online by Facebook user KP Lau on June 12 at about 7.08pm.

In the video, there appeared to be a skirmish and women's voices could be heard shouting as bystanders look on.

(Story continues after the video)

In response to Stomp media queries, the police said in a statement that the group of women were arrested under the Public Order Act along Tanglin Road at about 9.10pm.

The location is near The St Regis hotel where North Korean Leader Kim Jong Un was staying for the summit.

At the time of the incident, Mr Kim was on his way to visit Marina Bay Sands and Gardens by the Bay.

The police said that the women were actually in a "smaller, even more restricted special zone where security is even tighter because of their proximity to where the United States of America and Democratic People's Republic of Korea leaders are staying".

The police said that the same group of South Koreans were at Sentosa in the vicinity of Capella Singapore hotel earlier on the same day where they unfurled their banners to promote their cause.

The police then found them near Shangri-La Hotel, where US President Donald Trump was staying, and in possession of protest placards.

"They were warned to leave the enhanced security special event area," said the police.

However, the group did not comply with instructions from the police to leave the area and made their way to The St Regis Singapore, which is also within the special event area.

"The police again stopped and warned them not to carry out any protest activities," the statement said.

"During the engagement, they refused to cooperate with the police, became rowdy and started to shout.

"Despite police’s repeated warnings, the group continued shouting and were subsequently arrested.

"During the arrest, the group struggled and were uncooperative.

"They were found in possession of protest placards."

Related Stories
Uncle and auntie shout at police officer -- who handles it calmly like a pro
Kim Jong-Un lets his hair down for selfie with Singapore ministers at Gardens by the Bay
Donald Trump and Kim Jong Un share historic handshake at Sentosa
More About:
protests
arrested
Trump-Kim summit
police