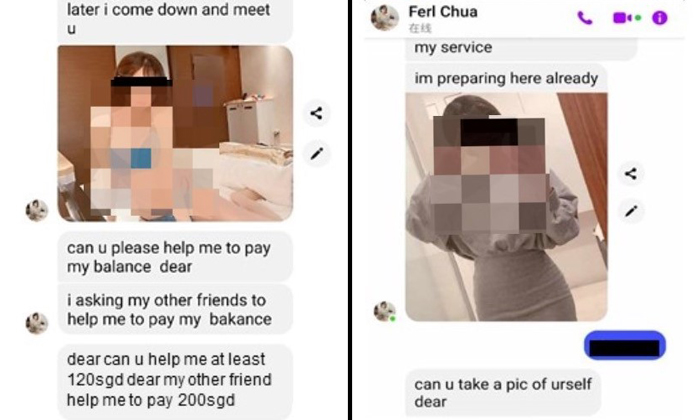 The police are investigating five men, aged between 19 to 50, for their suspected involvement in five cases of sexual services scams.

The police said they received several reports between March and April 2021 from victims who had responded to online platforms offering sexual services, but did not receive the service after payments were made.

During an island-wide operation between May 3 and May 4, the police rounded up the five men whose bank accounts had allegedly been used to receive money from victims of such scams.

One of them was allegedly a victim of sexual service scam.

Preliminary investigations indicated that the victims of the sexual service scams usually received unsolicited friend requests from scammers on social media platforms like Facebook and Tagged, or befriended these scammers through online listings on Locanto and Skokka.

The scammers then proceeded to chat with the victims on other messaging platforms like Telegram, where they asked the victims for payments before meeting up.

The payments were usually made via bank transfers or payment apps such as PayNow or PayLah.

In one of the cases, where the man was also allegedly a victim of sexual service scam, the scammer had purportedly also requested for the man to allow his bank account to receive money, for the purpose of remitting money overseas via a remittance agency, citing family emergency as a reason.

The police said in a statement on Saturday (May 8): "Unbeknown to the man, the money he received was purportedly from a victim of a sexual service scam as well.

"By allegedly assisting to receive and transfer money from tainted sources, the men may have acted as money mules and purportedly facilitated money laundering."

Investigations against the five men are ongoing.

The offence of money laundering under the Corruption, Drug Trafficking and Other Serious Crimes (Confiscation of Benefits) Act carries a jail term of up to 10 years and/or a fine not exceeding $500,000.

The police said they take a serious stance against any person who may be involved in scams, adding: "Perpetrators will be dealt with in accordance with the law."

If you wish to provide any information related to such scams, you may call the police hotline at 1800-255-0000, or submit it online at www.police.gov.sg/iwitness.

Related Stories
Man, 20, posed as woman on Locanto to cheat victims in over 30 cases of sexual services scam
Woman, 73, sobbed while sentenced to jail for allowing criminals to use her bank account
Woman jailed after taking $17,000 mistakenly transferred to her by love scam victim
More About:
scam
sex
money