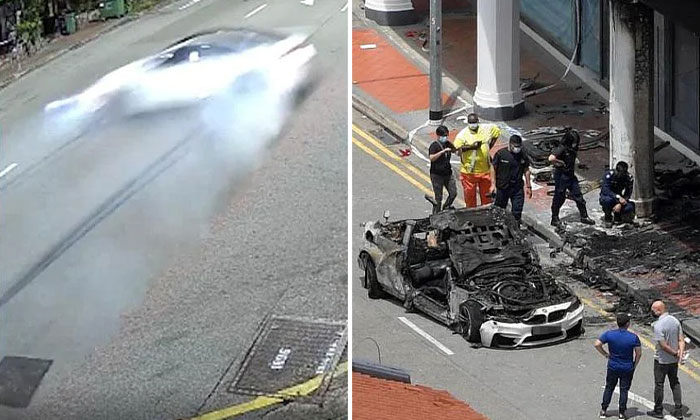 The coroner's inquiry into the deaths of five men who were in a fiery car crash in Tanjong Pagar on Feb 13 last year heard that the white BMW M4 had hit speeds of up to 181kmh.

The Traffic Police investigator added that 29-year-old Jonathan Long Junwei was the driver when the accident occurred. He clocked speeds of up to 148kmh while driving around the Tanjong Pagar area.

Senior Staff Sgt Firdaus said that at about 5.40am, the car crashed into a pillar at a shophouse and burst into flames.

It was travelling at an estimated speed of between 87kmh and 99kmh at the point of impact.

Senior Staff Sgt Firdaus said Mr Long is likely to have been alive shortly after impact, breathing in significant amounts of smoke from the fire before dying from severe burns.

He added that an autopsy showed that Mr Long had a blood alcohol reading of 86mg of alcohol per 100ml of blood. This exceeded the legal limit of 80mg per 100ml. 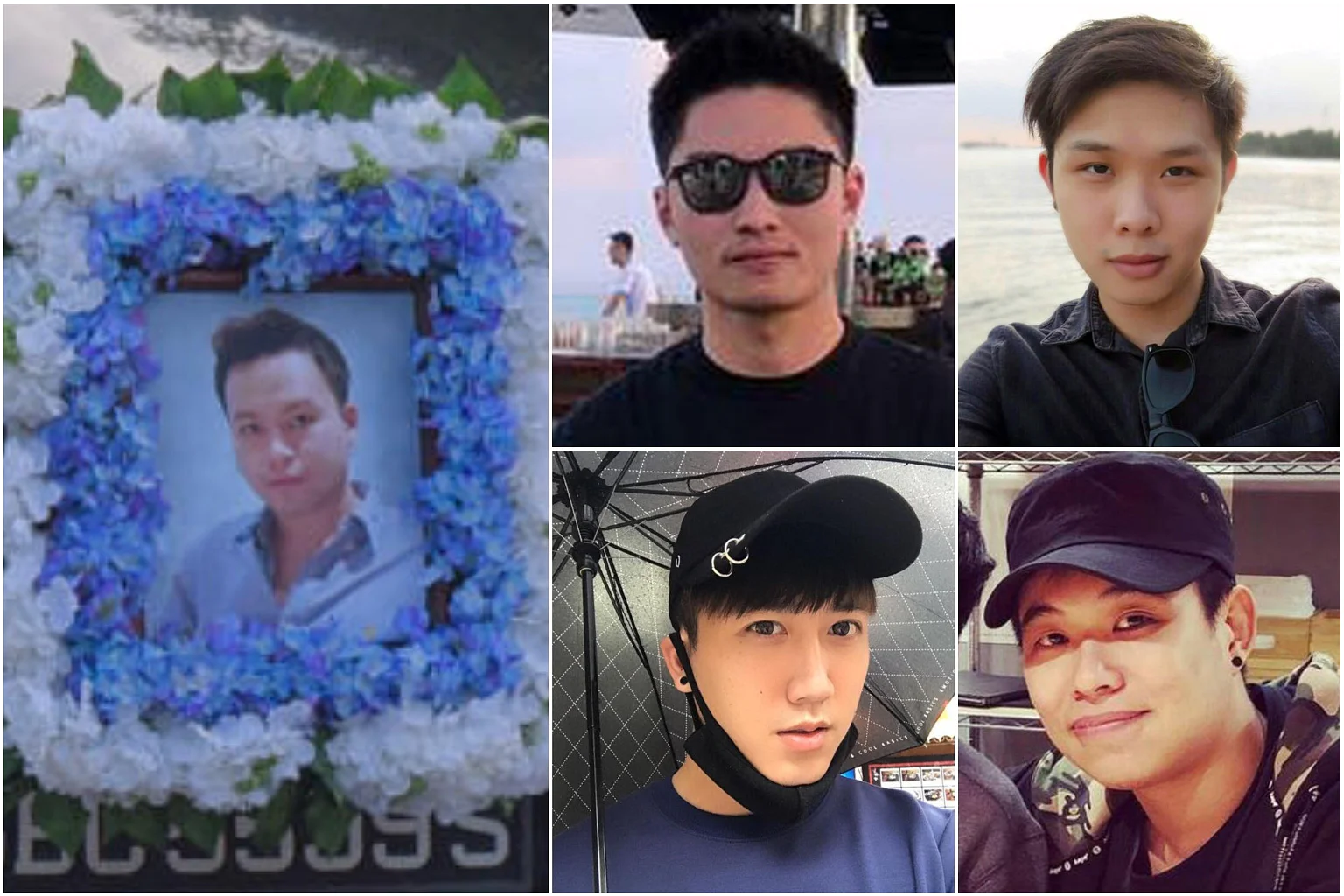 Senior Staff Sgt Firdaus told the court that shortly before the tragedy, Mr Long and his friends were at a Chinese New Year gathering in Ang Mo Kio where they consumed alcoholic drinks.

They then left for Hong Jja Jang restaurant in Tanjong Pagar Road, where they continued drinking. The eatery was run by Mr Park Se Jin, whose age was not mentioned in court.

Senior Staff Sgt Firdaus added that according to witnesses, Mr Long later decided to show his newly purchased BMW to his friends.

The group took turns at the wheel, each driving once around the Tanjong Pagar area.

Mr Yap, who was later found to have 119mg of alcohol per 100ml of blood, was the first to take it for a ride that morning.

Mr Park and another friend Phoo Yi Lin joined him in the car. Ms Phoo’s age was not mentioned in court.

Mr Yap drove it from the Tanjong Pagar restaurant towards Keppel, and made a U-turn in Enggor Street.

After that, he drove the car along Tanjong Pagar Road towards Maxwell Road before stopping near the eatery.

The court heard that Mr Yap had driven the car at speeds of between 75kmh and 88kmh.

Mr Park then took the wheel, with Ms Phoo as the passenger.  He also followed the same path and drove at speeds of up to 59kmh.

Ms Phoo then took over. Mr Park and Mr Yap were in the car with her. She also followed the same path, clocking speeds of between 109 kmh and 130kmh.

This was ascertained from closed-circuit television camera footage in the area.

But dashcam footage taken from a taxi in the area suggested Ms Phoo may have hit speeds of up to 181kmh, said Senior Staff Sgt Firdaus. [Editor's note: During Thursday's inquiry, it was said that Mr Park was behind the wheel when the car reached between 109 kmh and 130kmh and dashcam footage suggested he could have hit speeds of up to 181kmh. It was also said that Ms Phoo drove up to a speed of 59kmh. The AGC clarified on Friday that Mr Park drove up to 59kmh, and that it should have been Ms Phoo who drove at between 109kmh and 130kmh and may have hit 181kmh.]

Mr Long was the fourth driver and four of his friends - Mr Teo, Mr Tan, Mr Yap and Mr Wong -  joined him in the vehicle.

They did so even though the car had designated seats for only the driver and three passengers.

Ms Phoo used her phone to record footage of the fourth round when Mr Long clocked speeds of up to 148kmh. He was speeding along Tanjong Pagar Road when the car skidded and mounted a kerb.

The court heard that the airbags of the car did not deploy in the accident.

Senior Staff Sgt Firdaus said the car was not modified with ethanol injection or any parts that could have resulted in a malfunction. 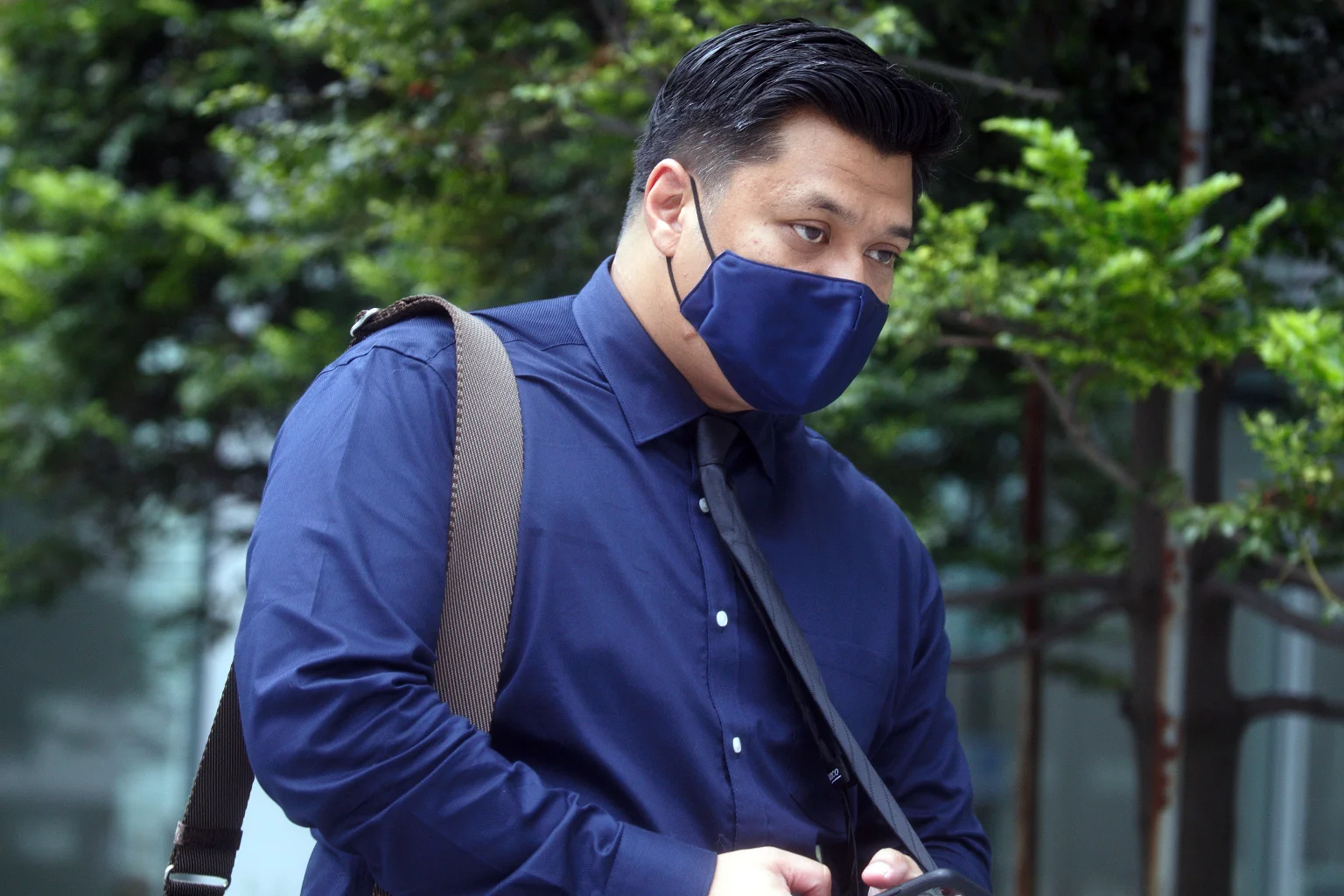 But the charge pipes were replaced with non-original parts. Charge pipes direct exhaust from an engine through a turbocharger to increase power.

Senior Staff Sgt Firdaus said that instead of the original silicon material, the replacement charge pipes were made of a stronger aluminium material with heat-resistant coating.

The inquiry was told that while these replacement parts had holes that could be used for ethanol injections, they were sealed. Ethanol injections are used in some cars to improve their performance.

After the accident, Mr Long’s fiancee, former air stewardess Raybe Oh Siew Huey, 26, rushed to the scene to try to help the occupants and was badly burned in the incident.

She spent four months in Singapore General Hospital and needed multiple reconstructive surgical operations to help her recover from her injuries. 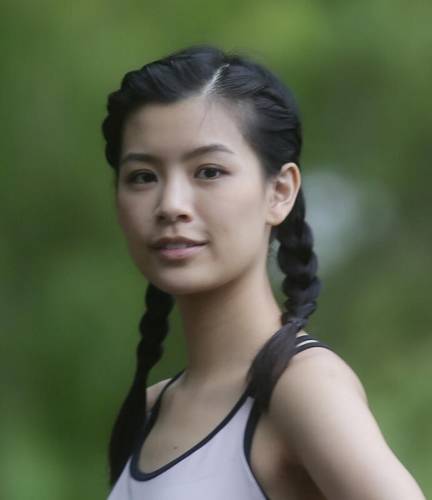 Ms Raybe Oh Siew Huey rushed to the scene to try to help the occupants and was badly burnt in the incident. PHOTO: ST FILE

The court was packed on Thursday morning with lawyers and friends of the deceased.

They were addressed by the State Coroner who extended his condolences, and said the family members were allowed to raise questions during the inquiry. 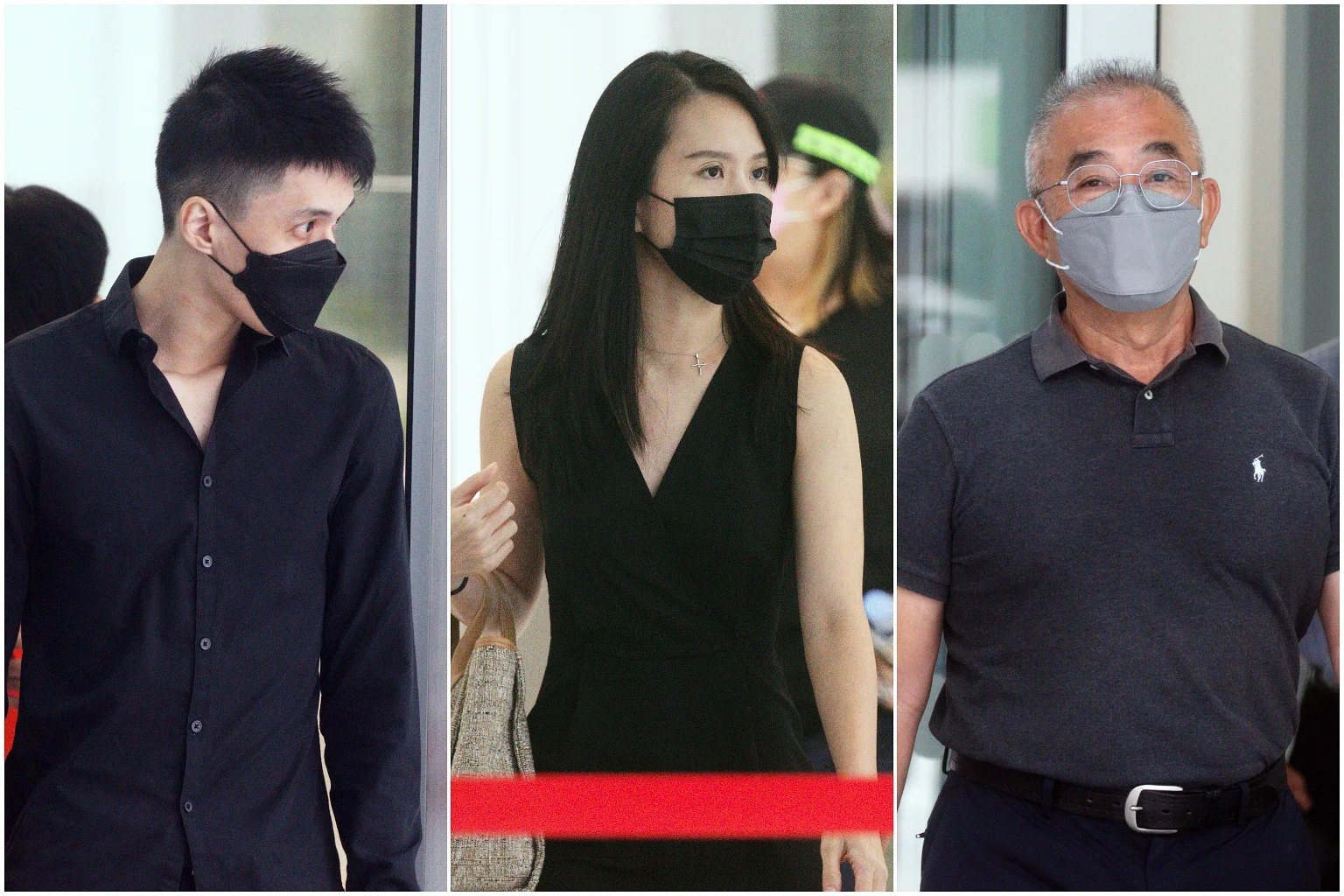 Ms Wong asked who was wearing seatbelts at the time of the accident.

Senior Staff Sgt Firdaus said that this could not be determined conclusively from investigations, as much of the car was damaged.

But he said Mr Wong is believed to have had a seatbelt on, as the buckle in his seat was still attached.

The investigation officer added that Mr Teo did not have a seatbelt on as he was not in a designated seat.

He said that Mr Long, Mr Yap, Mr Tan and Mr Wong were alive when the fire started, while Mr Teo would have been barely alive at the time. 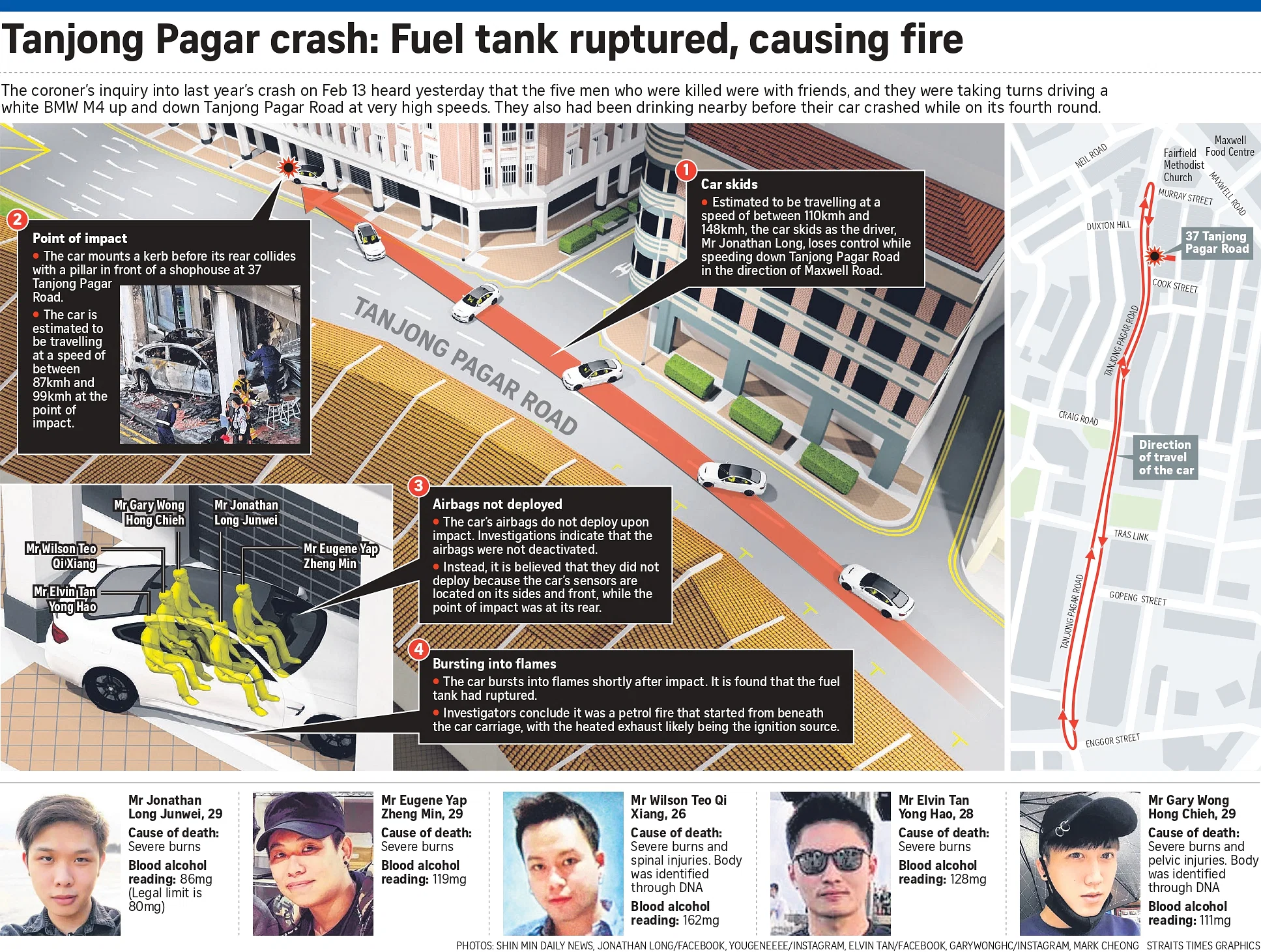 Security camera footage showed the vehicle travelling down Tanjong Pagar Road before it crashed into the shophouse. It burst into flames seconds later.

Ms Oh is seen in mobile phone footage running into the flames to try and save the men. She emerges seconds later covered in flames.

He testified on Thursday afternoon that the car’s fuel tank had ruptured and leaked petrol onto the road, fuelling the fire which started at the undercarriage. The exhaust may have ignited the fire. 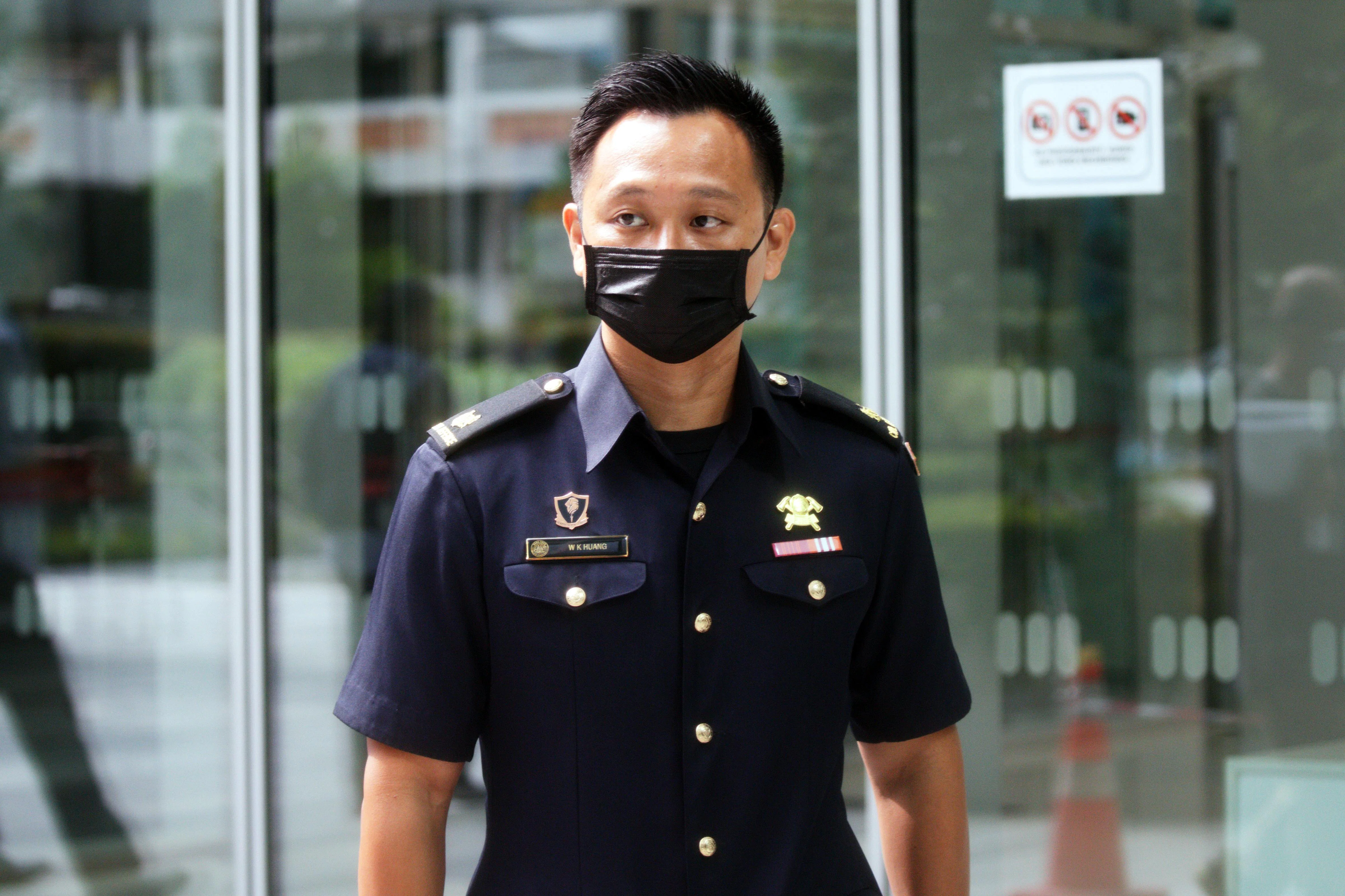 Four of the occupants of the car were working as financial advisers at Aviva Financial Advisers. Mr Wong was a former representative there.

The Land Transport Authority looked into the road conditions in Tanjong Pagar following the tragedy and subsequently installed more traffic-calming measures such as road dividers as well as pedestrian crossings.

The coroner’s inquiry has been adjourned to a later date.