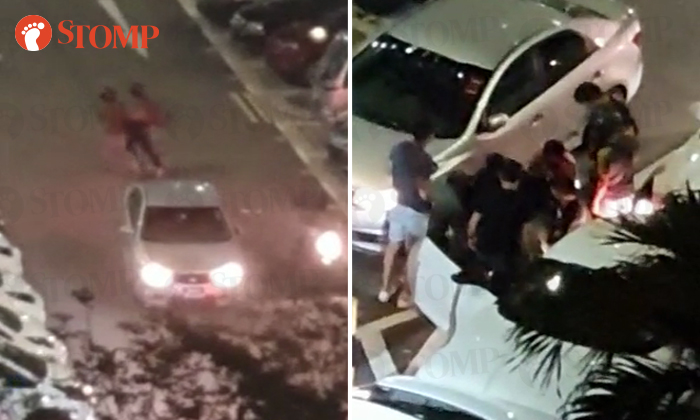 Five suspected drug offenders were arrested during an enforcement operation conducted by the Central Narcotics Bureau (CNB) on Tuesday (Apr 14).

All five suspects are Singaporeans in their twenties, and a "large variety of drugs" worth at least $360,000 were also seized during the raid.

Stomper K shared circulated videos of the arrest, which he said were recorded at Block 131 Yishun Street 11.

In a statement, the CNB said that officers had intercepted a car driven by a 22-year-old suspected drug offender in the vicinity of Yishun Street 11, just as it was about to exit the carpark, on Tuesday evening.

"As officers moved in to arrest the suspect, he put up a violent struggle and necessary force was used to subdue him," added the CNB.

Officers searched his car and discovered around 1,400g of heroin, cash amounting to $12,600 and a knuckle duster.

The suspect was brought to his residence in the same vicinity.

"Drug paraphernalia such as improvised smoking apparatuses, a digital weighing scale, and cash of S$9,000 and RM912 were also found in the unit."

Separately, another group of CNB officers raided a unit in the vicinity of Yishun Avenue 9, where they arrested a 21-year-old female suspect and a 24-year-old male suspect.

Fourteen ‘Ecstasy tablets and 43g of cannabis were also found in the unit.

In the same evening, yet another party of CNB officers arrested a 24-year-old male suspect at the lift lobby of a block in the vicinity of Yishun Avenue 4.

Cash of $11,950 was found within the vehicle rented by the suspect.

The suspect was then brought to his residence, where about 3g of 'Ice', 2,362g of heroin and 12 'Ecstasy' tablets were found.

Officers also recovered a 'karambit' knife and a stun device during the search.

Shortly after, a 23-year-old female suspect was also arrested when she returned to the unit.

"The 3.76kg of heroin seized is sufficient to feed the addiction of about 1,790 abusers for a week," added the CNB in its statement.

"Despite the current challenging situation, CNB will continue to carry out enforcement operations to ensure that the streets are safe from drugs."