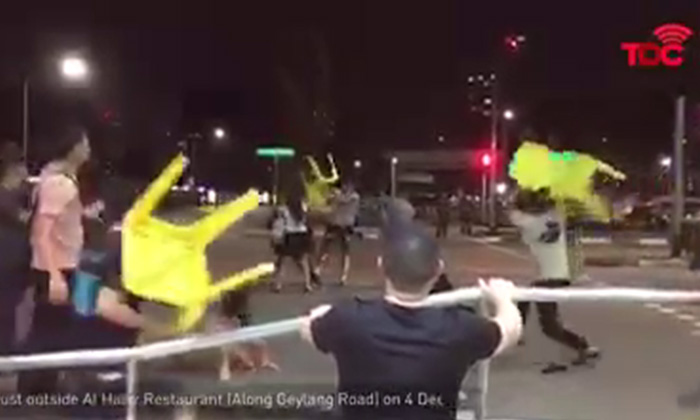 Five men, aged between 21 and 47, have been arrested after several men were filmed using chairs to hit one another in a fight along Lorong 1 Geylang.

A video of the fight was uploaded onto Facebook page Sg Chinese Community, where it has since garnered over 970 shares and over 130 comments.

According to the video, the fight occurred outside Al Hariz Restaurant which is located at 73 Geylang Road.

A woman can be seen trying to hold a man back but it's unclear what she was saying to the man.

The police were alerted to the fight at about 11.40pm on Wednesday (Dec 4).

Through investigations and ground enquiries, officers from Bedok Police Division identified the men and arrested them within four hours of the report.

Preliminary investigations revealed that the men had a prior dispute while at a restaurant located in the vicinity earlier that night.

Related Stories
Man gets beaten up by group at Thai disco in Orchard
2 elderly men arrested for fighting at Boon Lay Shopping Centre: 1 was unconscious after dispute
Women try to stop 2 men 'wrestling' in middle of the road outside Bugis Cube
More About:
arrest
fight
fighting
Geylang
police