4m-long python with bruises on head and body likely died from abuse, Acres appealing for info 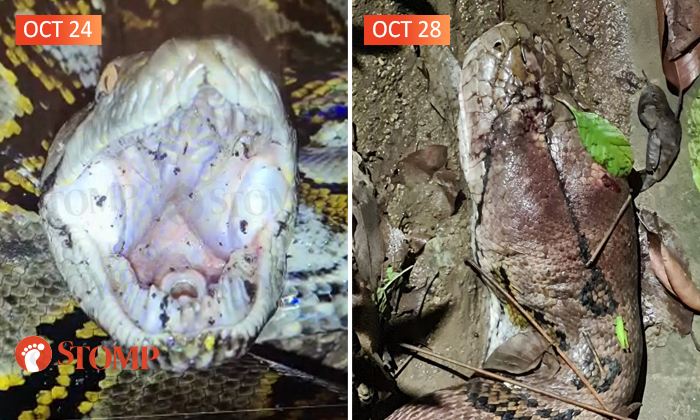 A large python was found dead along Old Upper Thomson Road on Wednesday night (Oct 28) — just days after it was seen alive and well.

Stomper Christian Bassett said he first spotted the snake, which measured over four metres long, by the side of the road on Saturday night (Oct 24).

It was around 1am and he was thrilled by the sighting, prompting him to take photos and videos of the creature. 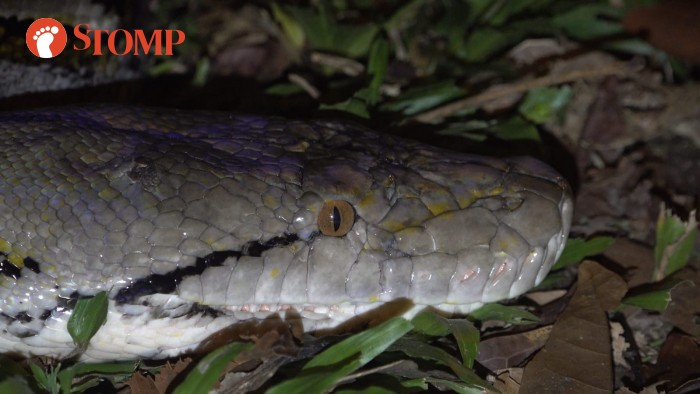 The nature enthusiast, who runs a YouTube channel documenting Singapore's wildlife and biodiversity, said: "The snake was enormous. Pythons this size are rarely seen here in Singapore as they are normally only around two to three metres long.

"It was indeed a magnificent specimen.

"I took some footage, then encouraged it to move off the side of the road abd back into the forest a little. Unfortunately, I have found many dead snakes in the past that had been needlessly killed by people. I did not want this magnificent animal to experience the same fate.

"On Wednesday night, I was walking along the same route when I found the snake again in an ambush position in the drain.

"The snake was unmistakable due to its immense size. I was extremely happy to see it again and started to take photos. It did not take me long to realise the snake was dead.

"On closer inspection, it seemed like its head had taken a terrible blow, perhaps killing it instantaneously. You can see what seems like a dent in its skull with internal bleeding and obvious bruising.

"I believe that the killing happened just hours before I found the python. There was hardly any leaf litter on the snake, and it had fresh blood around the mouth and head.

"I was deeply saddened and angry to see this. To think what sort of person would kill such a magnificent and fantastic creature for no reason. Snakes will never hurt anyone if left alone."

Christian also shared photos of the snake's carcass. Close-up images show the reptile with its head bloodied and bruised. 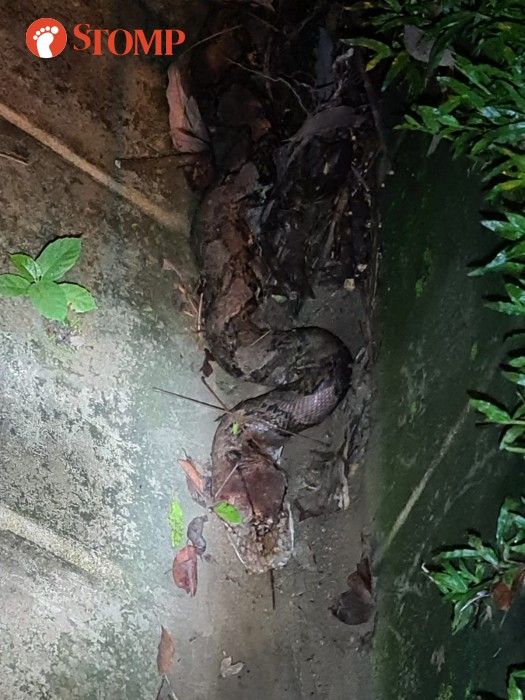 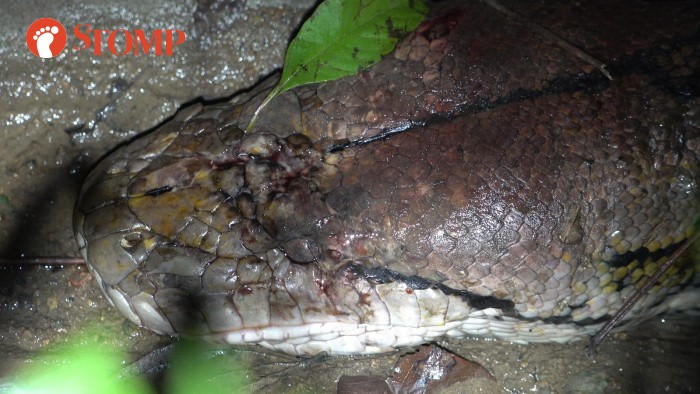 Christian told Stomp: "The same snake was still well and healthy when I saw it near the same location with my friends on Saturday.

"This is terribly sad, especially since it's a huge python by Singapore standards.

"Unfortunately, this is not the first dead python I have found that had been killed by humans.

"People kill snakes often out of ignorance and misunderstanding. It is really snakes that need to fear humans, not vice versa.

"People do not need to fear snakes; they will never bother or attack humans among as people give them space and admire them from a distance. If you stay on designated paths, you also will not step on a snake by mistake. A snake will only bite if it feels threatened.

The Stomper, who created his YouTube channel with the main aim of heightening awareness of nature in Singapore to help preserve and protect it, added: "After experiencing this tragic story, I really wanted to do something to try and help educate people about snakes and stop this mindless killing of these wonderful creatures.

"Attention needs to be drawn to this terrible deed that is all too common in Singapore."

Christian also advised members of the public to avoid providing the location of rare or exotic wildlife when they post stories and photos of any sightings.

He said: "People had photographed the snake earlier in the week and given the location of where it was, which naturally attracted people to the area to search for it.

"Not sharing the exact location of such sightings would really help to protect these animals and prevent hordes of people descending on it."

Stomper John, who also alerted Stomp to the incident, similarly said that the python was "definitely 100 percent killed by humans".

He added: "No other animal would be capable of killing a snake of this size. Its head was smashed and its body was left to rot."

In response to Stomp queries, the Animal Concerns Research & Education Society (Acres) said it got to know of the incident through Facebook posts by members of the public.

Mr Kalai Vanan, deputy chief executive officer of Acres, said: "It is unfortunate that this beautiful specimen was not just found dead but was dead at a nature reserve.

"Based on photos of the carcass, we can only make an educated guess that the python, a protected wildlife died from abuse rather then a vehicle accident.

"The injuries/bruises are mostly prominent on the head and 1/4 of its body, an indication that someone could have used a weapon/object to hit the snake to kill it.

"The python was believed to be in excess of 3.5m, making it an adult specimen in Singapore.

"We understand that the the National Parks Board (NParks) has since retrieved the carcass and is looking into the incident. We hope that the perpetrator(s) are caught and dealt with."

Acres is also seeking information and eyewitnesses to the incident.

Mr Kalai added: "We would like to remind everyone that snakes are protected wildlife and are a cherished part of our biodiversity."

Members of the public who see a snake or any wildlife in distress are urged to contact Acres' 24-hour rescue hotline at 97837782 or NParks.

Mourning the loss of the snake, Christian said: "Rest in peace, magnificent python."

View more photos of the python in the gallery. Pictures #2 to #4 show the snake alive, while Pictures #5 to #11 show its carcass in the drain.