49-year-old woman hit by car and flung onto road at Tampines Road junction: 'I could've died that day' 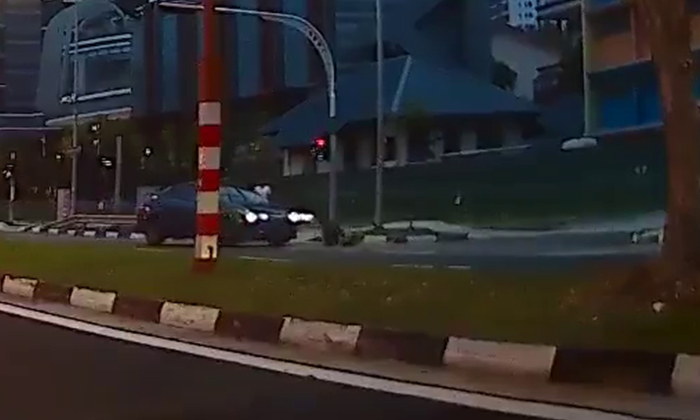 A 49-year-old woman was hit by a car and flung onto a road at the junction of Tampines Road and Hougang Avenue 1 on Nov 16.

Stomper A, who said she's the sister of the victim, alerted Stomp to the accident that occurred at about 6.55pm.

She also shared a link to a video of the accident that was published on Facebook page Singapore Road Accident.

Stomp spoke to the victim who recounted the night of the accident.

The victim told Stomp: "I just had dinner with my son and my husband at a coffeeshop at Upper Serangoon Road.

"My husband was riding his bicycle, so he was ahead of my son and I.

"I remember it was a peaceful and cooling night. We were waiting for the green man and when it lit up, I looked to make sure there weren't any vehicles before walking out.

"After taking a few steps, I recall a set of bright headlights right beside me. I thought that the car would stop but it didn't.

"Next thing I knew, I was flung through the air and landed on the ground.

"I tried getting up but I couldn't. I just there and my son was in panic.

"My husband told me that a couple who was crossing the road saw the accident and came over to help. The lady was a nurse.

"He also told me that a nurse who was on a passing bus asked the driver to let her alight so that she could help me.

"The two nurses held my hands and told me to calm down.

"I could hear the voice of the driver who hit me with the car. He kept asking me if I can get up and even tried to move my leg.

"One of the nurses raised her voice at him and told him not to move me."

With a quivering voice, she added: "At that moment, all I could see was the sky. I was just praying that I would be fine because I didn't know whether I will die or be permanently disabled.

"The hospital was quick with all the checks and they didn't find any injuries to my internal organs. I didn't have any fractures either.

"I'm very fortunate to still be alive. If the driver hadn't stopped, I wouldn't be able to be speaking to you now.

"If I had flung onto a kerb, I think I would be in a coma. Thankfully, all I have now are bruises, swelling and abrasions on my lower body. The doctor told me that these will go away with time.

"A colleague came to my place yesterday (Nov 21) and asked me where the accident occurred. After telling him, he managed to find footage of the accident on Facebook.

"I was surprised someone had caught it and I feel so thankful that cars have these cameras that can help me and the police with investigations.

"As of now, I have nothing to say to the driver. I'll leave it to the police to take it up with him.

"I'm concerned about these turns. When the traffic light has turned green, vehicles can go but then there is also the green man that signals for pedestrians to walk.

"This is very dangerous. If drivers aren't careful and if it had been a child or an elderly person, the impact could be worse.

"I would like to thank the two nurses who helped me. There are kind people around.

"I'm alright now and I want to move on with life. I thought about the things I haven't done with my family. I have been spending so much time at work and this accident has made me look at my life again.

"It has been a wake-up call for me as I've been taking so many things for granted. I could've passed on that day."

In response to a Stomp query, the police said: "At 6.56pm on Nov 16, the police were alerted to an accident involving a car and a pedestrian at the junction of Tampines Road and Hougang Avenue 1.

"The pedestrian, a 49-year-old woman, was conscious when conveyed to Tan Tock Seng Hospital.