$4,800 fine for man seen drunk in public during circuit breaker, dented boot of police car with his head 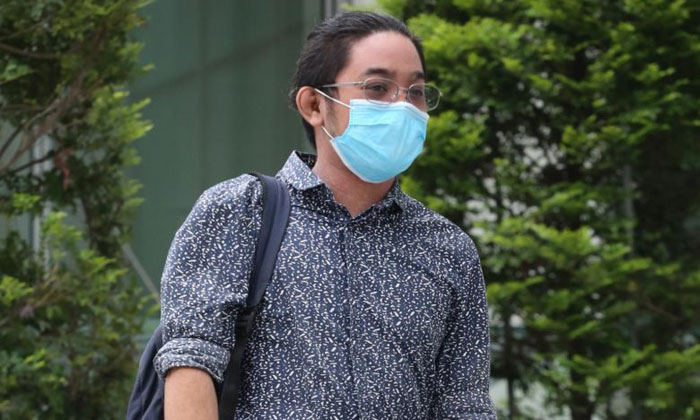 A restaurant employee breached circuit breaker measures on April 19 and met up with five colleagues for a drinking session amid the Covid-19 outbreak.

Filipino Navarro Charles Josef Guimere, 24, who was later spotted drunk in public, became unruly when police approached him in the wee hours the next day.

As officers were trying to get him to enter a police car, he banged his head twice on the boot of the vehicle, causing two dents.

He also hurled vulgarities at a policeman.

The Singapore permanent resident was sentenced on Monday (June 22) to a fine of $4,800 after pleading guilty to one count each of harassment and behaving in a disorderly manner while drunk in a public.

Two other charges - one count of mischief and an offence under the Covid-19 (Temporary Measures) Act - were taken into consideration during sentencing.

Guimere, who worked at the FOC Pim Pam restaurant in Orchard Road, had a social gathering at the eatery with his colleagues after business hours at around 10pm on April 19.

He left the premises about an hour later.

Instead of going home, he decided to sleep on a public pathway near the restaurant.

An eyewitness alerted the police at 12.17am on April 20 and officers who arrived at the scene managed to wake Guimere up.

He continued to sit on the ground and challenged the officers to arrest him.

The DPP added: "The accused was then placed under arrest at about 1.20am, and when officers tried to get him to go into a police car, he struggled and banged his head on the boot of the police car twice, causing two dents."

He was then moved away from the car and asked to sit at the curbside to calm down, said the DPP.

According to court documents, Guimere caused more than $300 in damage to the vehicle.

Officers made another attempt to place him in the police car about 15 minutes later.

The court heard that he again struggled and "necessary force" had to be used to secure him in the vehicle.

He then hurled vulgarities at a policeman who tried to secure his seat belt.

For harassment, Guimere could have been jailed for up to a year and fined up to $5,000.

For behaving in a disorderly manner while drunk in a public place, a first-time offender can be jailed for up to six months and fined up to $1,000.

Repeat offenders can be jailed for up to six months and fined up to $2,000.

Related Stories
Robertson Quay gathering: 2 more men charged for "chatting and drinks"
Student who visited Kim Keat Road shophouse to study fined $2k for unlawful gathering
Phase 2 aka the moment you've been waiting for: What you can do from June 19
More About:
Covid-19
fine
fined
court
drunk
harassment