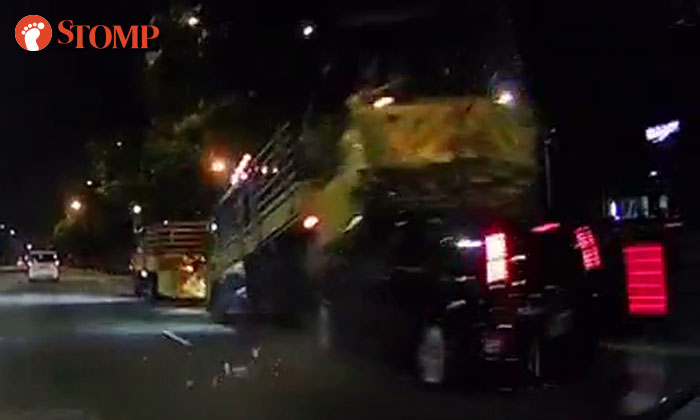 A 44-year-old woman was taken to hospital after the car she was driving crashed into two lorries on the Pan Island Expressway (PIE) towards Tuas today (Mar 13) at 1.18am.

Stompers Shawn and David alerted Stomp to the video that had been circulating online.

In the video, a black car is seen ramming into the back of a stationary yellow lorry which in turn hits a similar lorry in front of it.

The lorries were at the right-most lane on the expressway and had hazard lights on and a lighted arrow to alert drivers behind to change lanes to the left.

In response to a Stomp media query, a police spokesman said that they were alerted to the accident at 1.18am.

"The car driver, a 44-year-old woman was conscious when conveyed to Tan Tock Seng Hospital," she said.

Related Stories
Lorry driver arrested for suspected drink-driving after crashing into sheltered walkway in Serangoon
44-year-old man sent to hospital after car accident along SLE
Mystery video of woman who ends up on car's bonnet after getting hit at pedestrian crossing posted on FB
More About:
accident
lorry
collision
expressway
PIE