4,000 evacuated in Century Square fire: Meet the off-duty police officers who helped save the day 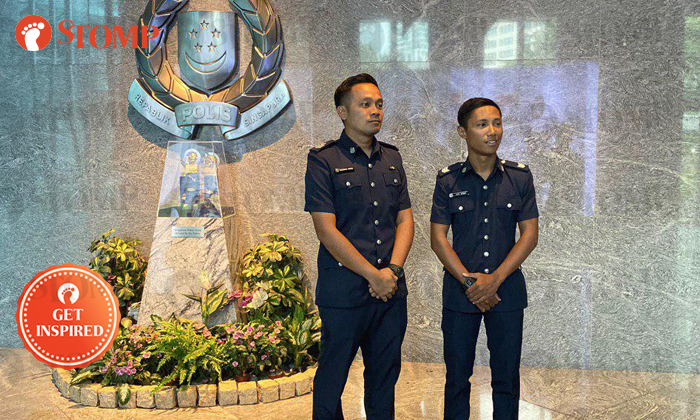 Both of them happened to be in a food court at Century Square shopping mall on Tuesday afternoon (Nov 5) when a fire involving a floor-cleaning machine broke out.

Stompers Elizabeth and Ken had earlier contributed videos and photos of the incident that saw 4,000 people being evacuated from the mall.

Two off-duty officers, who immediately sprung into action at the scene, recounted the incident in an interview with Stomp on Friday (Nov 8).

Staff Sergeant Muhammad Farhan Bin Safaruan, 31, was buying drinks at the food court at about 3.45pm when he heard a ‘boom’.

Farhan told Stomp that he felt a gush of wind and said: "Everyone was screaming and running out of the food court.

“I saw smoke coming from a particular section and my main thought was to put out the fire.

"I frantically looked around for extinguisher and found one nearby. Instinctively, I took it and tried my best to put out fire.

"There were other food stalls and I wanted to contain the fire because I didn’t want it to spread to other kitchens."

Sergeant Muhammad Azri Bin Ad’nan, 27, was also at the food court with his family.

He said: "We were near the food court’s entrance, near where the boom was.

"When finishing our food, I heard a loud boom and felt a touch of heat.

"My first thought was family's safety. After my family left the food court, I looked back and saw Farhan trying to extinguish the fire.

"It was quickly getting smoky and thought I should help. I saw some kitchen staff who were really old and they were struggling to walk quickly.

"I went in and out a few times and shouted for anyone who could hear me to get out as soon as possible."

In the midst of the situation, both Farhan and Azri recall a male member of the public who assisted them in their efforts.

Farhan shared: "There was an uncle on the phone. I thought since he was calling the Singapore Civil Defence Force (SCDF), I could concentrate on putting out the fire.

Azri saw the same uncle on the phone but noticed he was having difficulty communicating. The uncle handed the phone to him and Azri confirmed that the man was speaking with an SCDF operator.

Farhan’s wife, 27-year-old Nur Siti Nabilah, was alone in the food court while her husband was fighting the fire.

“My wife was worried and wanted to know where I was. When she exited the food court, she saw me with a fire extinguisher," added Farhan.

“She told me she was relieved that I was safe and that I had helped to diffuse the situation.”

After the firefighters and police officers arrived, Farhan and Azri informed them about the situation and left.

When asked who they are, they identified themselves off-duty police officers.

Farhan said: "I didn’t expect the news to blow up. I thought about just putting out fire and making sure everyone was safe.

"If we did our best to the best of our abilities and everyone is safe, we are satisfied.

"Any other officers who were in that situation would have done the same."

Azri added: "I believe Farhan and I have the same mindset.

“We don’t want to have any regrets if we don’t do anything. We might be off duty but we are still police officers."