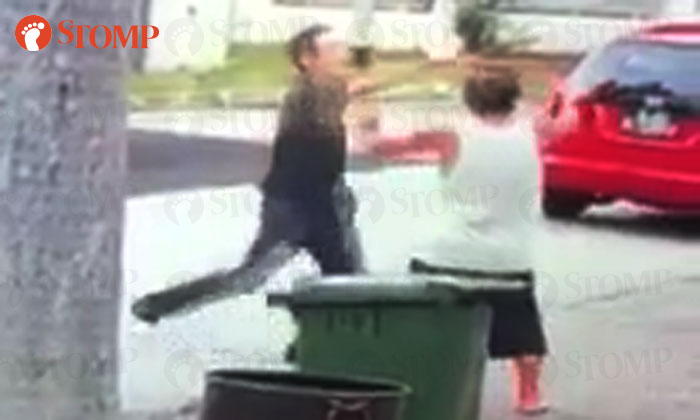 A 40-year-old man was arrested on Aug 20 after getting into a fight with another man at a house in Kew Crescent.

Stomp understands that the men are father and son.

Stomper Kangwei, who stays next door to the family, sent Stomp a video of the incident.

The father and son were struggling against each other in their front yard and the son was heard shouting, "Open the door and let me take my things from the car!"

His father appeared to be preventing his son from leaving their home which made the younger man furious.

He shouted a stream of expletives and started getting aggressive by kicking the gate and throwing a Singapore flag over it.

His father is heard telling him, "Nothing is in there, it's not important now."

Soon after, a police car arrives at the residence.

In response to Stomp's media queries, a police spokesman said:

"On 20 Aug at 9.19am, the police were alerted to a case of criminal intimidation at 18 Kew Crescent.

"A 40-year-old man was arrested in relation to the case.