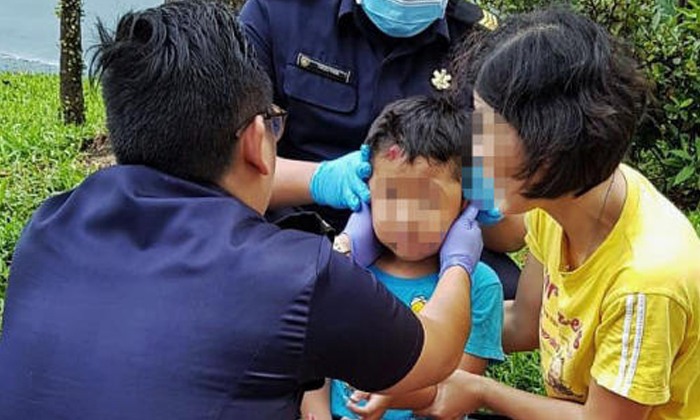 A four-year-old boy suffered minor injuries after being hit by a taxi in Toa Payoh on Sunday afternoon (Nov 25).

In response to a Stomp query, the police said that they were alerted to an accident involving a pedestrian and a taxi along Lorong 4 Toa Payoh, towards Lorong 2 Toa Payoh, at 2.32pm.

The child was conscious when taken to KK Women's and Children's Hospital.

Stomp understands that he sustained minor abrasions on his body and forehead.

Stomp also understands that the boy's mother was not with him when he crossed the road. He is believed to have wandered off from her.

When Shin Min Daily News reporters arrived at the scene, they saw more than 14 onlookers assisting the boy, whose forehead was bleeding. He was also being comforted by his mother.

The cabby, 65-year-old Mr Huang, told Shin Min that he had a Caucasian family of three on his taxi at that time of the incident.

He had reached the aforementioned location when the traffic light turned green. Upon stepping on the gas pedal, Mr Huang saw the boy crossing the road.

"I slammed on my brakes, but it was too late and my taxi hit the boy," added Mr Huang.

One of Mr Huang's passengers, a 65-year-old woman from Finland, said the taxi stopped after hitting the boy.

According to her, the boy rolled onto the taxi's windscreen, before being sent flying five metres and landing on the road.

She said: "The cabby called the police after that."

Related Stories
10-year-old boy on scooter taken to hospital after getting hit by motorcycle at Yishun
10-year-old car passenger injured in accident with van at Clementi junction
Boy killed in CCK accident had dashed out in front of bus when crossing road with pregnant mum
More About:
child
injured
accident
taxi
pedestrian