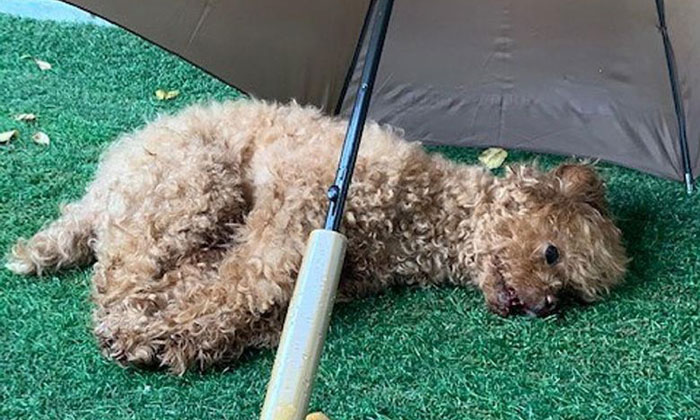 A maid was so annoyed that her employer's pets were noisy that she took one of the dogs and flung it down from a balcony on the third storey of the house.

The 11-year-old toy poodle, named Dou Dou, landed on a grass patch on the ground floor and started bleeding from its mouth.

The Indonesian maid, Guyanti Wulandari, 28, then alerted her employer, Mr Stanley Hui, who took the dog to a vet.

Dou Dou was found to have suffered multiple injuries and was euthanised to reduce its suffering.

Guyanti was sentenced yesterday to four weeks' jail after pleading guilty to one count of causing unnecessary pain and suffering to the dog.

She was tasked with performing chores including cooking and looking after Mr Hui's pets - two birds and two dogs.

Mr Lim said Guyanti had no prior experience in caring for pets.

National Parks Board (NParks) prosecutor Packer Mohammad said the maid went to a bedroom on the third storey at around 9am on May 13 this year to clean a bird cage.

The court heard that Dou Dou was also in the room.

Guyanti then became annoyed as the birds were noisy and Dou Dou was barking continuously at her.

Mr Packer said: "As (Dou Dou) continued to bark, annoying her, the accused opened the glass door of the bedroom to the balcony, picked up (the dog), walked outside to the balcony and threw it down from the third storey."

She then panicked and ran downstairs to check on the dog before alerting Mr Hui.

Suspecting that the maid had thrown Dou Dou down, he contacted NParks the next day.

During investigations, Guyanti said she was under "a lot of stress" at the time as she had just broken up with her boyfriend.

She said Mr Hui's father, who had helped to take care of the pets, had returned to Hong Kong, resulting in more work for her.

Yesterday, Mr Lim urged the court to sentence his client to a minimal fine.

The lawyer said Guyanti had "snapped" that day and cannot explain why she committed the offence.

"The accused has learnt from her mistake and is distressed by this entire affair, and is extremely apologetic for any hardship and pain she had caused," he said.

For causing unnecessary pain and suffering to the dog, Guyanti could have been jailed for up to 18 months and fined up to $15,000.