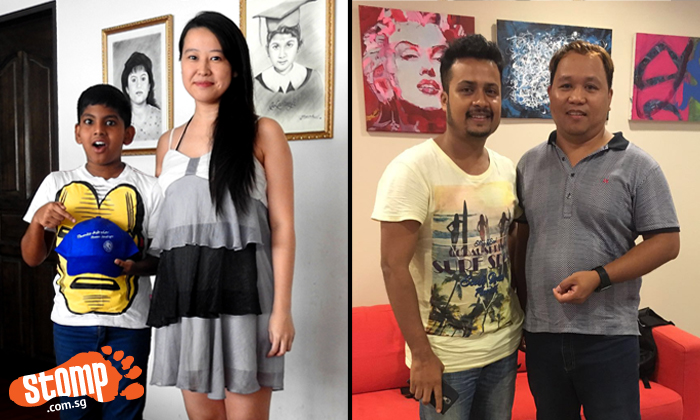 In less than a year, Stomp's WhatsApp service has evolved from a tool that delivers content to one that empowers users to go beyond just reading and reporting news.

Provided free of charge to everyone (click here to join!), the service allows you to receive the latest news updates as well as interact with the Stomp Team on a personal level.

But more than that, it has also helped to connect readers from all walks of life and highlight the many good things happening in Singapore that would otherwise go unnoticed.

Here are four ways that Stomp has made a positive impact through our WhatsApp service.

Photo (from left to right): Ashvin, his mother and Jocelyn

Imagine being unable to see, move or speak properly as one side of your body is numb. Imagine your stomach starting to hurt and worrying that you might lose your first child before you have even got to see him. Imagine wondering if your car will explode you are still trapped inside, after an accident.

Imagine being so scared that you start to cry... when an angel appears to calm your fears and all of a sudden, you don't feel so alone anymore.

That was exactly what happened to Jocelyn Yu, following a car accident earlier in June this year.

And while most people simply stood by taking pictures, 12-year-old's Ashvin Gunasegaran first instinct was to go forward and see how he could help, despite friends warning him that it might be dangerous.

For his gallant deed, the Yishun Primary School student was presented with a Public Spiritedness Award by the Singapore Civil Defence Force (SCDF).

But while all the media and public attention was on Ashvin, nobody had heard from the accident victims whom he had helped.

Stomp wanted to provide readers with the full story as well as wrap up the viral incident with a happy ending. And we did.

After receiving a tip-off from a reader via WhatsApp that one of the victims, 32-year-old Jocelyn, had wanted to personally thank Ashvin following her recovery, we arranged for both parties to meet.

And as they say, the rest is history.

Photo (from left to right): Habib and Edgardo

Stomp's effectiveness in reuniting people with their lost possessions (and sometimes even missing family members) is a known fact, and a priceless family heirloom was just one such item.

Earlier in April this year, Stomper Edgardo had lost his beloved gold chain and posted a report in hopes of locating it.

Again, Stomp's WhatsApp service came in handy when Stomper Habib, who saw the article, texted us to say that he might have found the accessory.

After verifying that it was indeed the missing gold necklace Stomp arranged for both parties to meet so that they could do the exchange.

But what we loved even more than helping Edgardo retrieve his precious chain was how both men hit it off immediately. They even exchanged contact numbers and left the Stomp office with a newfound friendship.

Photo: Jeslyn, the one who found the ring, accompanied by her boyfriend

A woman's story about she had purchased an engagement ring with her pilot boyfriend, who had to rush off for a flight to the Maldives in three hours, was truly a riveting tale not to be missed.

The couple had accidentally lost the ring shortly after purchasing it last month and could not find it again, despite backtracking their steps and having SMRT staff help in the search.

She had lost all hope of finding it... until she saw a Stomp report about how a female commuter had found her diamond ring and was waiting for the owner to claim it.

When the ring's owner contacted Stomp via WhatsApp to identify herself, she was even on the verge of tears.

We worked our magic once more by getting both parties to meet up on the same evening and the ring's owner showered everyone with thoughtful gifts to express her gratitude.

Photo: A fan conversing with our editor and a reader telling us how much she loves the heartwarming stories on Stomp.

Stomp's WhatsApp service is very personalised as it feels like you are simply chatting an old friend up. We respond to queries, reply greetings and are always happy to hear from you.

We would also like to take this opportunity to thank our readers for their unwavering support over the past 10 years as none of these would be possible with you.

Related Stories
4 great reasons to join Stomp's WhatsApp service
The power of Stomp and how we get things done
Getting your daily dose of inspiration on Stomp has never been this easy
Kind woman who helped injured elderly at Chinese Garden meets him after reading his Stomp report, gets big hug from him and receives SCDF award
Girl who lost wallet at Subway store gets it back after Stomp report -- and defends Stomper from cynical comments
Facebook user who found woman's lost laptop: Stomp will be arranging for them to meet
Girl fails to pay $11.50 fare and leaves cabby with broken bag full of rubbish
Guy who snatched shoes from Fernvale Link unit apologises to owner after seeing himself on Stomp
More About:
heartwarming
inspiring
Stomp update
WhatsApp
Stomp gets things done