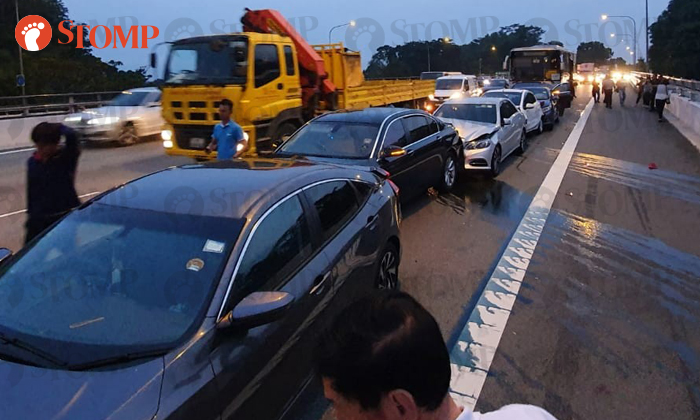 Four people, aged between 34 and 63, were taken to hospital after a chain collision along the Bukit Timah Expressway towards Woodlands Checkpoint on Wednesday evening (Aug 28).

Responding to a Stomp query, the police said they were alerted to an accident involving six cars and a bus at 7.20pm.

Stomper Mitsu was on his way home when he drove by the accident site.

Mitsu, who shared a photo and a video of the scene, said: "My first thought was the safety of all the drivers and passengers.

"I stopped my car by the roadside and checked on all of the affected drivers.

"They began to gather by the roadside and checked on one another.

"The driver of the very first car checked his rear and front cameras for video evidence.

"The last vehicle was a bus and I heard from several people that the driver couldn't brake in time, hence the chain collision."

According to police, two car drivers and two passengers from one of the cars were conscious when conveyed to Khoo Teck Puat Hospital.